Marlon Wayans Says Goodbye To ‘Little Brother’MC Kevin, Who D-ied After Fleeing 3 Some In Fear Of Wife 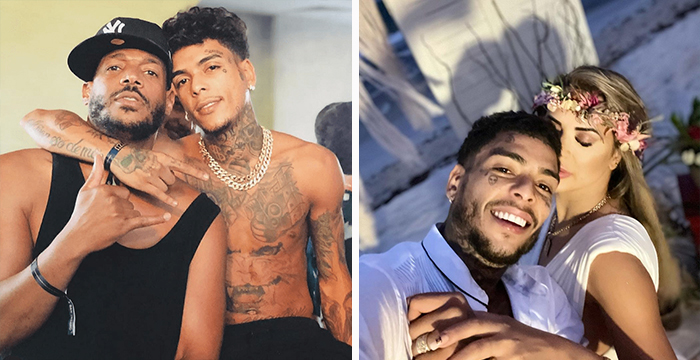 MC Kevin’s passing continues to make waves on the internet as people are collectively shocked by the circumstances surrounding his loss. The Brazilian rap star was steadily becoming a global name before he lost his life after falling 5 stories from a hotel balcony. Sadder still are the details surrounding why he was up there and why he was fleeing the hotel suite in the first place. While friends, family and fans from around the world have paid their respects, one friend in particular remained quiet until recently.

MC Kevin was staying in Rio de Janeiro for a performance at the club Mansão Imperador, located in Madureira in the North Zone of the famed city. At the local event known as Baile do Imperador , the “funkeiro” held his last show accompanied by his wife Deolane Bezerra in the early hours of May 16 2021. Kevin and Bezerra had just wed just a few weeks prior to his loss. The pair tied the knot on April 29, 2021 in a ceremony in Tulum, Mexico. They lived together in Mogi das Cruzes, in Greater São Paulo. Bezerra is a lawyer.

MC Kevin was a party boy and popular with the ladies. Unfortunately he decided to step out on his wife not too long after the got married. He and friend Victor Elias Fontenelle met model Bianca Domingues on the beach boardwalk earlier that day. According to Globo, they invited Domingues back to their suite where the three began to have a fun. Kevin became alarmed by a knock at the door believing his wife had discovered them. In an attempt to get away, he jumped off the balcony to get to another balcony around 7 p.m. Unfortunately he did not reach the other balcony and fell 5 stories to his loss. The knock on the door was not his wife but instead another friend who was looking to get in on the action.

Comedy legend Marlon Wayans appears to have formed a bond with MC Kevin before his loss. The two have pictures of each other up on their social media. FODA! My little brother. @mckevin my heart. Such a sweet pure soul. You were like a mischievous little boy with a golden heart. You loved your people, you loved your friends, you loved Brazil, you loved the favelas, you loved life. I’m sad bro. You had so much more to do. Who will i party with now when I come to Brazil. I love you brother. Please kiss my mom up there. And she will hold you. You’re in good hands my bro. #ripmckevin #gonetoosoon to all his Brazilian fans just know he loved your THE MOST. I sad with you,” Marlon said.

MC Kevin’s wife also released a statement via Instagram story stating, ““You are and will always be the love of my life, the most beautiful love I had, the man who loved and admired me the most! Go with God, my boy, I will always love you!” Deolane also shared another post on Instagram stating, “You left and took a piece of me with you […] You were always so incredible… It’s not fair for you to leave like this It’s not. It’s not.”

MC Kevin’s official account released a statement as well asking fans for their prayers and strength during this tough time. Translated: “Your voice will envelop and enchant the sky, your joy will keep the angels awake because it will never be forgotten! We thank all the messages of comfort and affection for our beloved We ask for prayers and strength from everyone. Heaven welcomes you, Kevin”

Barbara White – Praying for peace in your hearts and the ever present comfort of the Lord to hold you all during your time of bereavement,my sincere co-ndolences

Grayling Roberts – I’m so sorry for your loss You two brothers have been in our home in our hearts and lives for years and will always be. God bless your hearts in this time of one awesome human being being called home.

Sump Ms America – I’m soooooooo, sorry for you and your family lost trust me I knows how you’ll are feeling to loose someone so close and dear to y’all!! I must say if you haven’t been there you can say I’m sorry, but I’ve been there I lost my son in 2006 he was eliminate in Orlando Florida also a good person would give you the shirt off his back not only that he finished college for computer science !! So I just wanted to say my heart for you smd you put family but until someone experience this they’ll never ever know how deeply the resists!! I love you guys and by the way y’all was one of his favorite actors !! He loved y’all so much kept me looking at y’all shows !! Again I’m sorry for you and your family loss