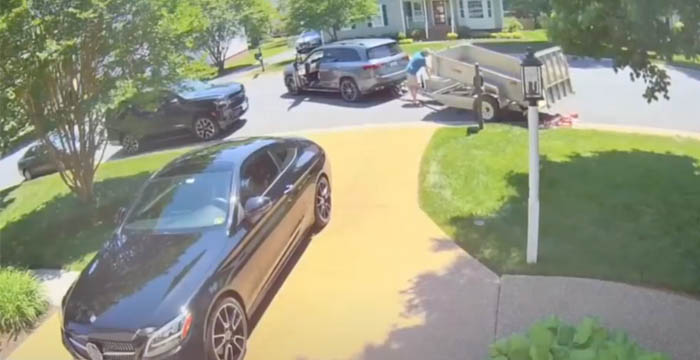 A Virginia teen who says she was shocked after her dad dumped 80,000 pennies on her front lawn as his final child support payment is using the incident to make a positive impact in the lives of others. Avery Sanford told CBS affiliate WTVR that she was surprised and hurt when the pennies arrived outside of her Richmond home last month. “It’s not just my mom he’s trying to embarrass,” she told the outlet of her father, who she says she has not spoken to in years. “It’s also me and my sister and it’s upsetting that he didn’t consider that before he did this.”

According to Sanford, who is a senior at Deep Run High School, her dad dumped the pennies on her lawn right after she turned 18, WTVR reported. “When I was in the middle of class, my dad came by,” she explained to the outlet. “He had rented a trailer. He pulled up in front of the house and turned the trailer on so it dumped out all the pennies on the grass.” Though Sanford did not witness the shocking moment, the teen said her mom was around at the time of the dumping. The incident was also recorded on home security camera footage, WTVR reported.

“My mom came out while it was happening and didn’t recognize him at first and she asked, ‘What are you dumping on my lawn?’” Sanford recalled to the outlet. “And he said, ‘It’s your final child support payment,’ and that’s when she realized who it was.” Despite being hurt by her father’s actions, Sanford told the outlet that she wanted to turn the negative moment into something good. She and her mom ultimately decided to donate the 80,000 pennies to Safe Harbor, a shelter for those who are experiencing or have experienced vi-olence, s-xual vio-lence, or human tra-fficking.

“Turning around and donating that money to moms and children in need, I feel like that really turns this situation into a positive one,” she explained to WTVR. “You can learn a lesson from it.” Following the May 21 incident, Sanford’s mom filed a report with Henrico County Cop, the department confirms to PEOPLE. Lt. Matthew Pecka says “Henrico Cop documented the incident; however no charges were filed.” In a phone call with WTVR on Tuesday, Sanford’s father – whose identity has not been publicly released – claimed his actions “were the result of 18 years of built-up frustration,” according to the outlet.

He also said his “emotions got the best of him” during the incident and “the last thing he wanted to do was to put a further wedge between him and his daughter,” WTVR reported. As she continues to process everything, Sanford told WTVR she has no interest in developing a relationship with her father. “It’s really hurtful and damaging to your kids when you do things like that,” Sanford told WTVR. “It doesn’t matter if they’re young or an adult, the actions of your parents will always have some effect on you.”

Mike 05 – Good job sir I feel your frustration, Pennsylvania isn’t into equality. I have my children 50% of the time and still pay her $1100 a month

Alex Gazaille – The guy hasn’t seen his kids in years… still pays. The woman he’s paying to… DIDN’T RECOGNISE HIM… he still paid. Good for him if it helped ease the frustration.

The Phoenix – Sure. This was just “spur of the moment emotions.” Not many people have 80k pennies laying around. Just sayin.

GrandpaBaner – This dude left pennies rolled up and didn’t even spread them throughout the grass. If you’re going to prank someone then at least do it right!

Via Nalani – Maybe its just me, yes its petty but he is paying child support….and we have no idea what his ex wife put him through….he said it himself he put up with it for 18yrs.

This Article Was First Published on  people.com