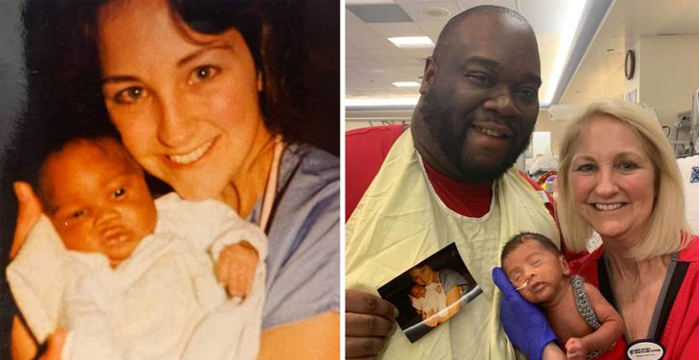 While Renata Freydin was perusing through the baby book of her David Caldwell, she came across a snapshot of her husband, then an infant, being taken care of by a happy nurse. This points out that it was the same nurse at the NICU that actually works for the newborn son of the family. Freydin posted that he recognised the lady as soon as he looked at the picture of hers. I immediately asked him who she was, and he said that she was the nurse who took care of him during his time at the NICU.

And that his mother loved her so much that she wanted a photo of the two of them the day he was born. Freydin disclosed to FOX that she had compressions and was ready to deliver at 29 weeks and that their child Zayne Alexander Caldwell was conceived on Jan. 30, only one day short of 30 weeks. Lissa McGowan has been one of the medical attendants investigating Zayne during his time in the NICU at Saint Peter’s University Hospital in Brunswick, New Jersey.

David didn’t trust me. We carried the image to the medical clinic where 3 different attendants affirmed it was her Freydin wrote in her post. Yesterday (Valentine’s Day) she was back grinding far and dealing with our little chunk again so we needed to reproduce the image.

The couple’s story and the going with photographs immediately expressed on social media, with numerous internet based life clients sending the couple, their infant and the attendant messages of adoration and backing. I love this story NICU medical attendants are the best, wrote a user on it. This makes my heart so cheerful Charming children all around, remarked another.

The mother says that the response to the couple’s story and photographs has been an unusual face to face: I never figured it would express so rapidly Freydin says that she takes comfort realizing her youngster is being minded after by a similar medical caretaker that treated her fiance. The last 2 weeks were full of worries and uncertainty, Freydin wrote. But we can easily breathe knowing that my nuggets nurse is the same who helped the man I love when he was in the same situation