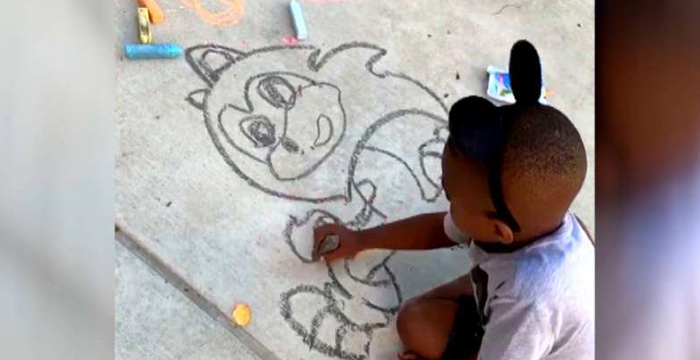 A 5-year-old boy is getting his drawing skills highly praised. Devon Mosley Jr., from Oakland, California, has always been fond of drawing, but it wasn’t until recently that his talent was recognized by the rest of his family— thanks to social media. I think his mother knew but we didn’t April Little field, grandmother of Devon, told InsideEdition.com. No one in the family ever paid attention to this.

That was until his aunt caught a video of him drawing Sonic the Hedgehog with chalk on the pavement and posted it to Twitter. The video had millions of views and celebrities chiming in on Devon’s talent, before she knew it.

I’ve gone to his mom and I’m like,Ugh, why didn’t you tell me you knew how to draw this?Littlefield said.’ She’s saying,Dad, he made you pictures for Mother’s Day and your birthday,’ but all that time I thought he showed me pictures from a coloring book. Littlefield said she was thankful that the community knew Devon’s creativity even before it did. Although Devon sketches only when the inspiration hits, he’s inspired by his family to do more.

I called him the kid of the world because I truly believe that if the community had not recognized his talent, we would certainly not have sought to nurture it or accept it, she said.  And it wasn’t until the universe found us out, and it was like,Your kid has a talent and don’t let it waste away. We now realize that he has a talent, and we want to share it with the world.