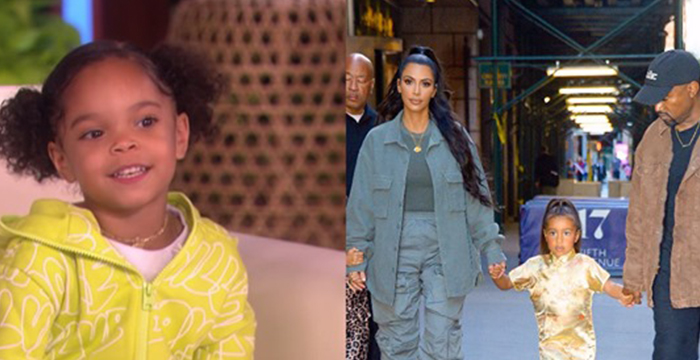 Kim Kardashian West is speaking out about her daughter North West‘s musical performance at Kanye West‘s latest Yeezy fashion show. On Monday, Kim and Kanye’s 6-year-old went viral after appearing on stage at the Yeezy Season 8 presentation during Paris Fashion Week, surprising spectators as she sang along to a musical track while models strutted down the runway. Later some on social media pointed out that North’s tune sounded similar to “What I Do?” by young internet sensation ZaZa.

Hours after the impromptu show, the parents of ZaZa then publicly asked Kim, 39, and Kanye, 42, to “SHOW LOVE AND SUPPORT TO THE ORIGINAL FIRST” and give credit to their 4-year-old daughter. In an Instagram post comparing North’s performance and ZaZa’s single, they wrote, “in July of 2019, ZaZa & her dad went into the studio for the ultimate experience! To finally begin making the music she wanted to make.

We take PRIDE in creativity, and believe whether a child’s involved or an adult… creativity deserves RESPECT/homage!” Explaining that they’re “not mad” but would appreciate some credit, the parents continued, “We admire Kanye west, and adore his journey. However, we don’t wanna feel like our daughter’s journey in the world of entertainment is being STIFLED.”

Kim then responded to the parents’ concern, explaining that North’s performance was a last-minute decision and they “didn’t mean to not give credit where credit was due.” “We love you, North is a huge fan and records in the studio all the time with her dad and is inspired by ZaZa and loves Lay Lay too!” the Keeping Up with the Kardashians star wrote. “Todays performance of North’s remix of ZaZa’s song was something she asked to do at the last minute and a complete surprise.”

She continued, “Would love for the girls to meet soon.” The KKW Beauty founder went on to give a shoutout to ZaZa on Twitter, writing in a tweet, “I’m so proud of my Northie!!!!!! Her 1st performance had me in tears! She had an impromptu performance on stage at her dads Yeezy Season 8 fashion show! Shout out to Zaza!!!” “North hopes you like the remix!!!” the mother of four added.

Likewise, ZaZa and her team had nothing but kind words for the Kardashian-West family. “All love, all good,” a post on ZaZa’s Instagram Story read, which featured a screenshot of Kim’s response to the family. “Thanks for ZaZa-Gang for all the support!” ZaZa became a viral star last year when a video of her dancing to “Water” by Schoolboy Q was widely shared on social media.

The online attention led her to appear on The Ellen DeGeneres Show, as well as a halftime show performance during a Chicago Bulls game. As for North, the young girl is no stranger to the musical spotlight. She’s confidently taken the mic up at her dad’s Sunday Service choir and belted out the songs in front of large audiences. She not only joined her father and his gospel choir as they performed a rendition of “As” by Stevie Wonder but she also sang “Poopy-di scoop” as part of her dad’s sing-along to his single, “Lift Yourself.”