‘You Are Cancelled’: Erykah Badu Boo’ed On Stage After Confessing Her Unconditional Love For R. Kelly Despite 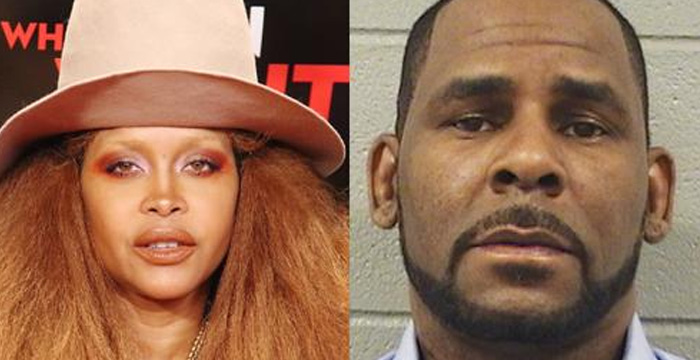 Erykah Badu is trying to live up to the title of the 2008 song “Healer”. The Neo Soul trailblazer recently came to the defense of her R&B “sibling” R. Kelly, professing her continued love for him and hopes that he can be “healed” in light of the decades long charges against him. Badu has never been one to mince her words, and even though she was met with a sea of boo’s, she stands firm in her belief that R. Kelly can be forgiven.

R. Kelly had been speculated for decades to have a strong fascination with younger woman, even marrying an underaged Aaliyah at the top of her career. Charges piled up for years about his antics until he was finally charged on February 22, 2019 following the release of a Lifetime documentary and Mute R. Kelly campaign. He was also dropped from his label. On July 11, 2019, Kelly was taken into custody facing a total of 22 counts as of January 29, 2021.

While many agree that the charges were due, several black celebrities have come forward with thoughts on the case and what they think has been a witch hunt or unfair treatment of the Chicago legend, who is still considered an icon to many. Tichina Arnold was one of the first to step forward. The “Martin” and “Everybody Hates Chris” star took to her twitter some time back to speak on “kindness and compassion”. Her tweets came around the time of Kelly’s initial sentencing so many felt they were directed towards him and his treatment by the public.

“Its disturbing to watch black ppl pounce on other black ppl when they are already down..guilty or not, but when it comes to holding others races accountable for their actions, I hear crickets. Check yourself before you wreck yourself. Operate through love & compassion.” Singer Lil Mo also commented on R. Kelly, wondering why his suffer took so long to speak out. “He helped a bucket list dream of mine come true, I’d never been to [Dr.] Dre’s before,” she said. “I refuse to allow this industry or anybody to taint his legacy. You mean to tell me that somebody is all of a sudden this mon-ster? Don’t do that. If something happens to the head of the house, the rest of the family struggles and suffers.”

Erykah Badu was doing a performance in January in R. Kelly’s hometown when she decided to offering him her prayers. “I dunno how everybody else feel about it but I’m putting up a prayer right now for R. I hope he sees the light of day if he done all those things that we’ve seen on TV and heard those ladies talk about. I hope he sees the light of day and comes forward.” She responded to boos from the audience: “What y’all say, him? That’s not love. That’s not unconditional love. But what if one of the people that was assail by R Kelly grows up to be an offender, we gonna crucify them?”

Brandon Rutledge – The new generation is dumbsmart. They have drive and seem to want to change things for the better yet many have this child like fantasy of blocking out everything they don’t like and actually thinking that just because they don’t like something that it shouldn’t exist. This tolerance that is constantly preached on is a two way street. You don’t have to like what people think but if it’s not drastically affecting you then ignore and move on.

Venus Lilith Axe – I’m NOT with having loyalty for a child predator or anything similarly perverse but everybody’s different.

Renae Taylor-Johnson – She’s not cancelled in my book. When she told y’all to cover your daughters, you came after her, this is the result. Get over yourselves and look at the big picture. You’re not gonna change a Pre-dator, but you can cover your daughters. Do that.

Nykiah Sky Walker – She’s coming from a spiritual point of view. He needs to be delivered! And so do all these other people that claim to be so “holy”