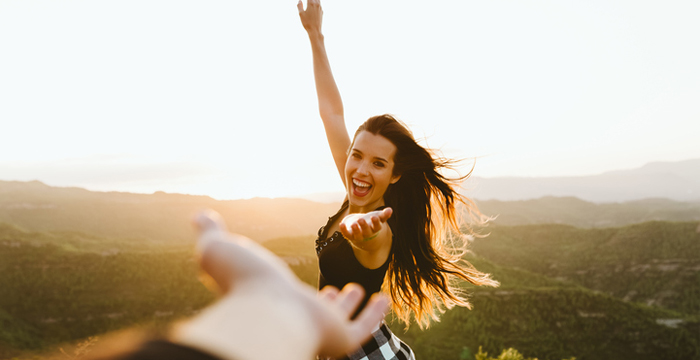 There was once a very good reason for women to lock it down with a man: Men offered something that we, as women, needed. Men were hunters, providers, and protectors, while women took on the role of child-rearing and maintaining a home. These were our biological roles, the natural order of how things were “supposed” to be, and because of that, for a very long time, no one batted an eye.

However, as we’ve clawed ourselves out of that mold against our inherent biology, our “need” to be married isn’t what it used to be. As Hanna Rosin wrote in “The End of Men,” “What if that era has now come to an end?” Yes, imagine that: The entire human history of women depending on men being wiped out — can you even fathom it? Can men stomach such a reality? Well, they should, we all should, because we’re living it right now as more and more women realize that marriage isn’t a necessity after all. But, in addition to that realization and awakening that many women are having, there are plenty of other reasons that are contributing to why women are getting married less and less. Here are 10 of them:

(1) ​THERE JUST AREN’T AS MANY WORTHWHILE GUYS ANYMORE.

As Kate Bolick writes in her piece, “All the Single Ladies,” simply, the caliber of men has declined greatly. Between increased joblessness and lack of prospects out there for men, there are far more be-ats than guys worth giving . In other words, “marriageable” men are few and far between.

(2) WOMEN ARE THE COMPLETE PACKAGE ON THEIR OWN.

Research from 2010 found that, for the first time in US history, more women than men are in the workforce, holding the majority of the jobs in the country. While there’s still that disgusting gender wage gap, we WILL get that taken care of sooner than later. Not only are there more women than men working, but women are surpassing men in education, too. For every two men who walks away from school with a bachelor’s degree, three women will do the same. We’re basically everything but the kitchen sink — and on extra good days, maybe the kitchen sink too.

(3) THE BEST DATING/RELATIONSHIPS ADVICE ON THE WEB – SPONSORED

If you’re reading this, check out Relationship Hero, a site where highly trained relationship coaches get you, get your situation, and help you accomplish what you want. They help you through complicated and difficult love situations like deciphering mixed signals, getting over a breakup, or anything else you’re worried about. You immediately connect with an awesome coach on text or over the phone in minutes. Just click here…

(4) MARRIAGE IS OUTDATED AND WOMEN KNOW THAT.

For thousands of years, marriage existed solely for economical and political reasons and was an institution that was often set up by families. It wasn’t about love; it was about marrying the woman who came from richest family or the man who had the fattest turkeys in town. It was, for the sake of argument, a necessity. However, that’s no longer the case — so much so that 44 percent of Millennials and 43 percent of Gen-Xers believe marriage is becoming obsolete, according to the Pew Research Center.

(5) MANY MEN CONTINUE TO BE Pressurize BY STRONG AND SUCCESSFUL WOMEN.

Masculinity is fragile. Most men don’t like it when they feel their masculinity is Pressurize in any way. Because of this, as we’ve evolved and s-hot up into the dark night like the works we are, we’ve alienated men — not because of anything we’ve done in particular, but because they can’t handle being with a woman who makes him feel inferior. It’s hard to get married when so many men cower at even the idea of a self-sufficient woman, let alone the reality of one.

(6) HE HOO-KUP CULTURE IS ALIVE AND WELL.

While the 1990s saw what was referred to as the “hookup culture,” we’re now living in the “Dating Apocalypse,” according to writer Nancy Jo Sales. Dating apps like Tinder have created a culture where hooking up and casual relationships have replaced serious commitment, and because this tends to work for a lot of people, marriage is taking a back seat.

When women were denied the right to be educated and to have careers, the concept of “marrying up” in order to “improve their lot,” as Bolick writes, was just what women did. It was keeping in line with what was socially acceptable without rocking the boat. But if you’re more educated, more successful, and the pool of men to choose from is on par with a wasteland of deteriorated good-for-nothings, why bother?

(8) WOMEN HAVE RISEN AND CONTINUE TO RISE.

Another amazing point that Bolick makes is that while women were fi-ghting — and we still are, make no mistake — for equality and the right to have a career and live their life on their own terms, men were falling behind. Men, especially white men, had nothing to fi-ght for and because of this, they fell behind and were surpassed by women in many ways. This trend is likely to continue, making marriage even less likely in the decades that follow.

(9) ​MARRIAGE ISN’T NECESSARY FOR WOMEN TO BE MOTHERS.

First of all, 40 percent of babies are born to single moms, and there’s a very good chance that percentage will rise as the stigma of being a single mother becomes less and less. There’s also the fact that, thanks to technology, you don’t even need a man if you want to have a baby. All you need is a trip to the seed bank. That’s a great option for women who don’t want the relationship part of motherhood.

(10) MEN HAVE LOST WHAT LITTLE VALUE THEY HAD.

As Bolick writes, when there’s an imbalance in the gender ratio, the gender with the smaller amount automatically has a higher value, which makes that gender want to work even harder to make themselves a hot commodity. But here in the U.S. where that current ratio is 50.8 percent females and 49.2 percent males, that healthy balance in the population only exacerbates a man’s disinterest in making himself better. Therefore, women, not impressed with what’s out there, continue to excel on their own, turning even further from the idea of marriage.

(11) WOMEN HAVE ESSENTIALLY BECOME THE MEN THEY WANTED TO MARRY.

As Gloria Steinem so accurately put it, “We are becoming the men we wanted to marry,” and she’s right. We are no longer the “fairer” gender, but a gender that’s a perfect self-sustaining entity that can take care of itself on every level. There’s no need to marry when everything you need you can give yourself — and on a silver platter, to boot.

Barry Johnson – Because marriage is nothing more than a bet, your betting half the things you own, and your children that she’ll love you forever.

lee macdonald – Get married for a couple of years, get divorce after the woman sleeps about or get board and not willing to put work into the marriage, The man losses more than half his wealth, becomes homeless, losses the children and then has to pay child support. Simply put the men have nothing to gain and eveything to lose.

Jeremy Weishaar – I got married. It was a nightmare. The wedding was a nightmare; I was hamstrung into spending huge pile of money to avoid losing my relationship over the wedding. The marriage was a nightmare; my wife immediately moved to control everything. It was like I no longer existed, except as a wallet. I didn’t even get laid anymore; two months I went through a 90 day dry spell. We faught constantly about money; I wouldn’t allow her to spend us into bankruptcy or debt servitude. Two years later I divorced, that to was a nightmare; she thought I owed her something and made me pay for as much as she could. What I learned is that marrying is very expensive, about as expensive as the divorce will be. I learned that there is NOTHING to gain for a man by marriage and that ‘romantic love’ is a lie to get your stuff. All the things that used to be there for men are gone.

Mono Lith – I was with my ex wife for 7 years and then we got married and the marriage only lasted one year. She woke up one day in the middle of the night and just left and until this day she still can’t give me a valid reason for why she left. The only thing that she’s told me is that two people can be married and not live together. I didn’t agree with that so after 7 months of fig-hting with her to come back home which she refused to do so, I finally gave up and filed for divorce. I lost my children and now I have to pay an insane amount of money for child support every month. The courts were biased against me because I’m a male. Marriage. Yes don’t get married.

This Article Was First Published on bolde.co