Woman Banned From Belgium Zoo For Having An Affair With Chimp. – Video 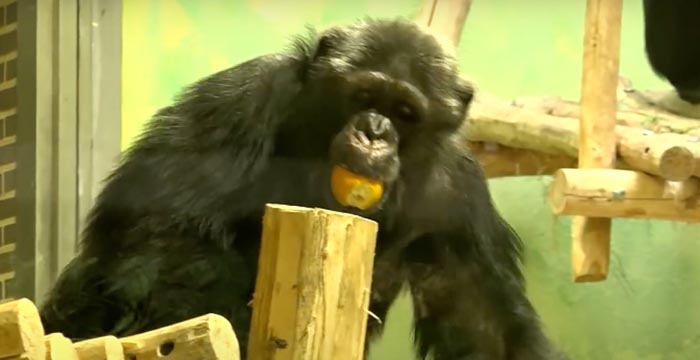 They say opposites attract, but one woman has taken that too far, and is banned from a Belgian zoo after the owners felt her relationship with one of their primates had gone too far. The lady’s name is Adie Timmermans, and she just got the boot from the Antwerp Zoo after a 4-year “affair” she’d carried on with one of their chimpanzees, a male named Chita per reports. Apparently, she’d stop by weekly and interact with the thing behind glass.

As for why she got banned turns out, Timmermans’ affection for the little guy was screwing with his ability to socialize with the other chimps in his habitat. The zoo reportedly said Chita was being isolated after visiting hours which is something that happens, it seems, if one starts to get too close to humans. Makes sense word is Chita used to be an actual pet, so his fondness for people isn’t really his fault, we suppose. Don’t worry this unrequited passion didn’t get physical they say it amounted to blowing kisses and waving and whatnot. So, no monkey s-x or anything thank God.

Still, Timmermans is pretty slash about it saying it ain’t fair that she can’t come see Chita, while scores of other people will continue to do just that. She genuinely seems upset as she’s on record as saying this is “all” she has in her life SAD! Here’s hoping they can both move on with their own species although, we’ll admit this brings a tear to the eye, no? They’ll always have Belgium c’est la vie.

Alyssa Madeira – In a world where people kiss their dogs on the mouth it is a little strange that she is being banned for blowing kisses behind the glass and waving .. seems like she’s an old lady who is lonely and probably loves animals. Unless there is more to that story, then

Dezrie Theresa – I wish her luck and peace of mind. Sometimes when I hear someone say, (it’s all I have) it just makes me think of that person’s mental health. I hope you could have a least one person you could count on in this life.

Krissy – I’m sad for the chimp and the woman. The headline is making it out that she is in a romantic relationship with the animal and that’s so wrong. She seems like a nice woman. Sad. Maybe they could have had her visit only once a month.

Alice Anne – The headline is so deceiving & hurtful to the poor woman.