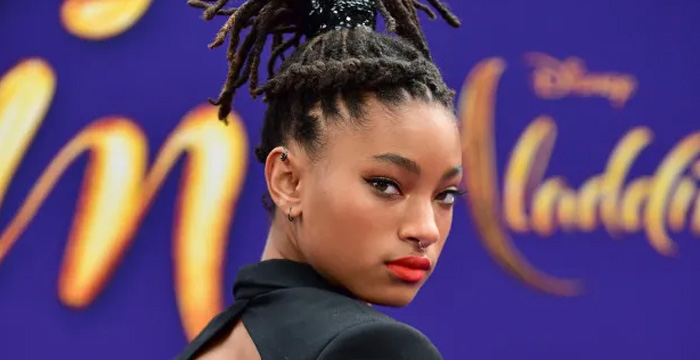 My last relationship was fueled by jealousy and blind rage; checking each other’s phones and brawl about our findings, angry at social media interactions and flirty onlookers alike. It took me a while to realize that weren’t in love, we were in possession of one another, totally and completely. Someone told me once that if you love a flower, you shouldn’t pick it up. Because if you pick it up, it depart and can no longer be the object of your affection, and I think the same applies to relationships.

The pressure of monogamy can bring to light a number of insecurities that may have been previously hidden and cause you to resent the person you once fell so deeply in love with. On the episode of Red Table Talk, Willow Smith kept it a buck about how she really feels about monogamy, and challenged us to see it differently. Willow is officially legal, and she’s no longer the “Whip My Hair” popstar that we knew in 2010, and she made that abundantly clear when she expressed her views on s-xu-ality.

Needless to say, both Jada and Adrienne had their pearls clutched, but young Willow was making some pretty solid points. Willow noted that because divorce rates are so high, it suggests that there is something left to be desired when it comes to traditional relationship structures in the modern age. She expressed that polyamory would probably be more common if couples could let go of their own fear of losing ownership their partners:

I’ve never been good at sharing. I’ll be the first one to help you get your own, but what’s mine is mine. When you dig deeper into this way of thinking, you have to wonder, does this extend to people too? My ex was MY man and I was HIS girl. We got so wrapped up in this idea that we forgot people are not trophies to be earned, owned, or placed in a cabinet for display, and thinking of them in this way only led to jealousy, insecurity, and ultimately the end of our relationship.

Without trust, honesty, and transparency, no relationship, whether it be a couple, throuple, or quadrouple, will be successful. She explained: According to Willow, societal pressures to be one thing to one person cannot only be detrimental to our self-esteem, but oppressive to who we were made to be as human beings. I’m not saying just because you’re not happy in your relationship, you should go out and open your marriage to other partners, but I do think Willow was wise beyond her years when it comes to making transparency a priority in your relationship.

Part of loving someone means being whole enough to not get intimidated when your waitress giggles a little too hard at his jokes or when he likes a picture on Instagram. And if you’re like Willow, who’s emotionally secure enough to manage her love for not one but two (or three) people, who’s to say you’re wrong? Just because you’re married, doesn’t mean you suddenly let go of all of the wants, needs, and desires you had before you jumped the broom. It just means that you have to be mature and honest enough to talk about them with your partner.

Luzolo Galilée Vundi – Wow it’s disappointing to see some of the responses here. She’s a human being with thoughts and opinions. Her way of thinking isn’t for everyone and she has a right to it. Personally i believe in monogamy cause I know myself and I could never share. Never. But she’s right, love and monogamy is a new thing only a few hundreds of years old in comparison to the history of polyamory. She did her research. Y’all don’t have to agree with her but there’s no need to be nasty to this young girl. The very reaction some of y’all are having is the very reason why people get pushed towards something.

Kirkland Hackett – She says she wants a male and a female at the same time. I listened to her “rant” and I found it to be sad. Anything can be about insecurity including having multiples at one time–and it you are in a throuple, wouldn’t that be monogamous? The Smiths kids–and I have been saying this for a while are troubled. Willow and her brother are just sad.

Mi Denisey – Strange..Polygamy was established by man before law of Christ..it involved marriage to more then one… fornication requires NO marriage at all. Adultery is biblical for sleeping with someone else’s marriage mate…so, exactly what is she really saying…. To date mankind has not made polygamy in the states legal..but just as sure as they keep stomping out biblical truth.. it’s just a matter of time.

Aphrodite Ballard – I think it’s great not only that it’s an open forum nonjudgmental discussion but she can articulate her feelings. Ppl are so quick to judge but was probably out here screwing without ANY guidance or parental convo. Some of your children may be out here doing the same stuff she’s talking about but they can’t come to YOU about it bcc you’re turning up your traditional love standards missionary position only noses. Polyamory isn’t new. It’s 2019 so antiquated love rules are out the door. She’s young and has the right to explore what she wants. She has a whole life ahead of her and she’ll probably live it more grounded in TRUTH than you or I.

This Article Was First Published on xonecole.com