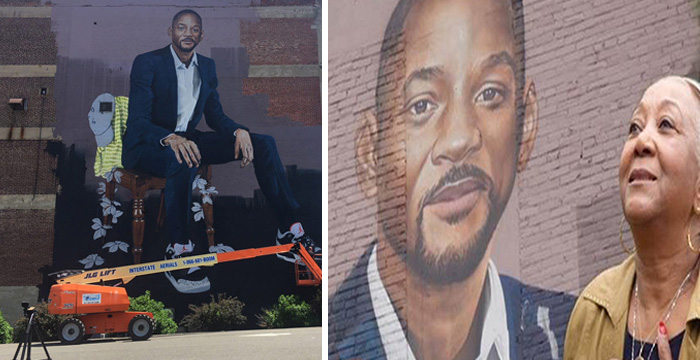 Will Smith was nearly at a loss for words when discussing the construction of a mural dedicated to him in his home city of West Philadelphia. British muralist Richard Wilson is in the process of creating the work of art, which is reportedly 65 feet high and will be visible at the side of the Gevurtz Furniture store.

Earlier this week (Jul. 1), Smith uploaded a video to his YouTube channel about the mural’s construction, as well as his and his mother Caroline’s reactions.

Throughout the video, Ms. Caroline, friends and leaders in the Philly community spoke about the importance of visibility for school children in the area, as well as the impact that Philly had on the growth and development of the multi-hyphenate.

“The idea that there would be a mural of me on the side of a school in West Philadephia just wrecked me,” the actor, musician and newfound social media superstar said.

“You couldn’t have done any better if you tried. It’s perfect, there is nothing you left out,” Ms. Caroline said upon viewing the art. The Fresh Prince himself hasn’t seen the mural in person yet, but when he does, we’re sure it will be a very special moment.

This Article Was First Published On vibe.com