Why Lana Banned From Rangers Bar. 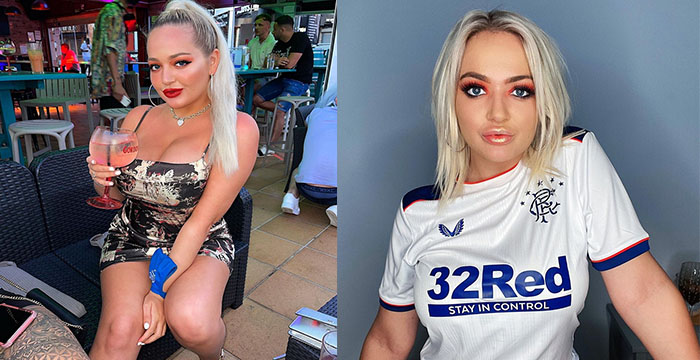 Rangers-mad Lana Wolf has been out of a b-r after going top-l-ss. The Only Fans glamour model made her way to the Ibrox Stadium in Glasgow for Rangers’ 2-1 win over Real Madrid on Sunday, July 25.

She was snapped outside the ground with fans and shared footage from inside the stadium. Lana says she tried to go for a drink at The Louden Tavern, but ended up getting banned.

She posted: “Funny when I got my b-bs out at an empty Louden when I was buying drinks owners didn’t say nothing yet today I’m banned.” Lana even shared a Photoshopped picture, pretending she was at the bar. She posted: “Having an amazing time in the Louden.” A spokesperson told the Daily Star: “Anyone with inappropriate behaviour will not be allowed in our premises.”

Earlier this month, Lana showed off her kinky set-up for England’s semi-final with Denmark. The model was left heartbr-oken after Scotland were out of the tournament after the group stage.

However, she still made an effort for the England game, dressing up in a amazing dress. In an Instagram story, Lana offered viewers a glimpse and posted: “How I’m watching the football tonight.”

She later joked that she was “looking like an actual street walker” – with a scaffolder sprawled out on the sofa. Lana added: “Don’t think he was expecting this when I checked out the hospital.”

Lana was bedridden for several days after contracting sepsis, an infection which can prove d-dly. In an earlier story on Instagram, she wrote: “I just hope I’m out by the Euros final because I got ticketssssss.”

Lana made her way to London with thousands of other fans for England’s group game with Scotland. On her way down, she was photographed on a train along with several other supporters.

Lana later commented on the pic, posting on Insta: “I hope my nan doesn’t see it.” She was also recorded taking her off while leaning out of a moving car in Snapchat footage.

Lana joined the Tartan Army in central London and said they were “booing me to get my out”. She’d earlier promised:

“If Scotland come through for us and win against England, I’ll not w-ear any p-ties for a whole week. “And if the team can pull off a victory for us against the Auld Enemy I’ll need to reward them with a special video and free lifetime Only Fans subscription.”