When Someone Called This Teen Fat, Her Boyfriend Had The Best Reaction – Video 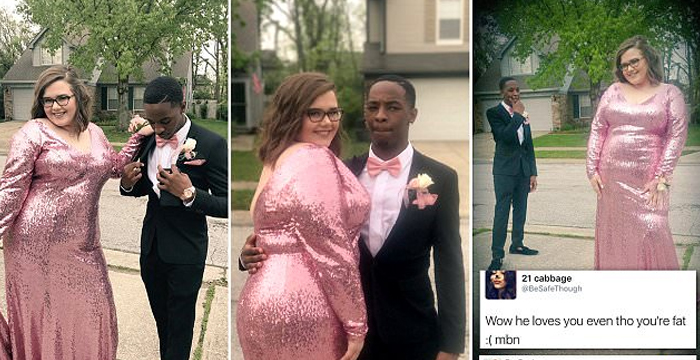 Sometimes all it takes is a few cruel words to ruin your self-confidence. But one student refused to let online trolls fat-shame his girlfriend, strike out at the cruel commenters by sharing his own message of love and support that has all of the internet praising their relationship. Tre Booker and his girlfriend Madison Haulter of Indianapolis, Indiana have been together for more than a year. The happy couple regularly shares pictures of them together and posts about their love for each other across social media.

So naturally, when the pair attended the Pike High School prom, they shared a series of adorable photos showcasing Madison’s full-length pink sequin gown, and Tre’s color-coordinated bow-tie and corsage. But while the couple looked blissful as ever, not everyone was feeling the young couple’s joy. Madison returned home from the dance to find someone had left a fat-shaming comment on her prom pictures.

‘Wow he loves you even tho you’re fat 🙁 [must be nice],’ said the comment. Madison took a screenshot of the rude reply and posted it to Twitter, saying, ‘Don’t see how people can be rude to people they don’t even know.’ Within minutes, messages of love and support started flowing in, with Twitter users saying, ‘Miserable people never want to see genuine happiness in others. You looked absolutely gorgeous,’ and ‘Oh my word you two are just adorable. You look so beautiful!’

Yet, the most powerful response of all came from Tre himself who, upon seeing the rude comments that others had left for his girlfriend, replied, ‘Your not fat baby. God made you just for me. Your perfect. [sic]’ Tre’s open support for Madison doubled the love shown for the pair. ‘Way to stick up for your girl bro,’ said one tweet. ‘A lot of dudes [are] scared to do that.’

The couple is clearly meant to be. They even have the overwhelming support of Madison’s father, Tom, who recently spoke to Fox 59 about his daughter’s relationship: ‘Tre is a young man full of integrity with a genuinely good heart and treats her like a queen,’ he said. ‘They both have good heads on their shoulders, and it’s fun watching them grow together. That’s all her mother and I could ask for concerning our daughter’s relationship.’

Clearly nothing is capable of coming between this truly in-love pair, who continues to express serious commitment to each other across social media. As Tre and Madison’s senior year of high school winds down, they are gearing up for the future. In the fall, Tre will begin earning his associate’s degree at Ivy Tech. Madison will begin studying psychology at Indiana University–Purdue University Indianapolis, so she may someday fulfill her dream of becoming a school counselor.

HeaYouIN, – From one Hoosier to another, you look GREAT!!!!!!!! And kuddos to your man standing besides you and reminding you how beautiful you are. I hope y’all had a blast at prom!!!!!

yoyoyo, – Some people sit on the internet all day looking to get validation from their pathetic lives by tearing others down! I’m so happy they’re happy together and nothing anyone else says matters!

Samsi – what’s wrong of being fat? it’s no big deal,…and u know what ? coz I got my gf too and she’s also chubby and FYI we’ll getting married so soon…..I love my girlfriend so mch

D Heyes – This is just what was supposed to happen. For the folks who have nothing better to do than to judge these young people really do not have a life of their own. So much hate in this world is. Even if these young people go about their separate ways a day, week or year later, they were happy in this moment. Just lose the negativity and mind your own lives.