Watch: Adorable Moment Schoolchildren Line Up To Give Kate Middleton A Hug – After One Little Girl Leads The Charge 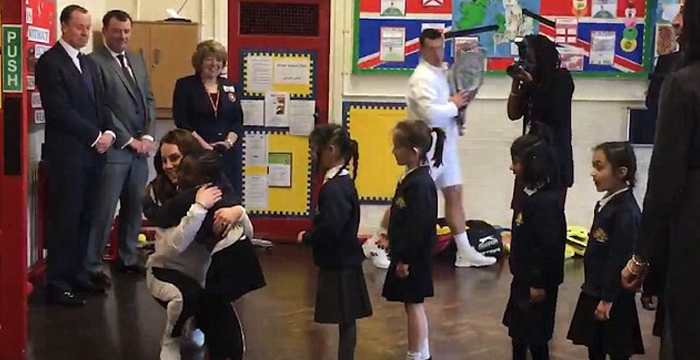 It is not every day a child meets a royal like the one they read about in storybooks and see in movies. So it is of little surprise these excited primary school pupils wanted to make the most of the few moments they had with the Duchess of Cambridge when she visited their school today. Pregnant Kate, 36, visited Bond Primary School in Mitcham, south west London, this afternoon to see the work of the Wimbledon Junior Tennis Initiative.

When it came time for her to leave, the pupils she had met politely lined up to bid the royal visitor farewell. But when Kate leaned down to shake hands with the first child in the queue, the little girl reached out for a cuddle instead – and the royal was very happy to oblige. The heart-warming moment, which was captured on camera, continued as the girl’s classmates followed her lead and each gave Kate a hug farewell – much to the delight of the duchess.

The Duchess arrived at Bond Primary School in Mitcham to see the work of the Wimbledon Junior Tennis Initiative, having changed out of the Boden coat she wore this morning into £220 luxury joggers and a £129 track jacket by PlayBrave. Kate rocked the sport luxe look in the Monreal London ‘tuxedo’ track pants, which she’s worn on two previous occasions, and £170 Nike Air VaporMax trainers, loved by footballers such as Cristiano Ronaldo and Rio Ferdinand.

Her sapphire and diamond engagement ring was also back on, after she removed it this morning for her visit to the Great Ormond Street, in accordance with the hospital’s policy on minimal jewellery. Earlier today, the royal cheered up four-year-old patient Rafael Chana, who is awaiting a heart transplant, as they exchanged smiles and high fives this morning while the Duchess was at his bedside. As they chatted Rafael told the Duchess about his love of olives and she replied: ‘I love olives. Are they your favourite? What do you prefer, Olives or sweeties?’

The youngster replied that he likes olives better and Kate said: ‘Olives over sweeties – amazing. I used to eat lots and lots of olives when I was little. They’re very good for you. ‘What other things do you like eating? Do you like pasta? Charlotte likes pasta too – with olives. Do you like pasta with olives?’ The lad replied: ‘I like olive nachos.’ Mum Katy Channa, 33, a primary school teacher from East Preston, near Worthing, said: ‘He told me he was going to ask her if she likes olives – he really does love them. I have to bring a bag in with us so I can use them as bribes.

‘It’s getting to the point where people get a little bit fed up with him talking about them.’ Pregnant Kate also cooed over six-month old Sienna Mcguire, who was born premature at 33 weeks and has complex heart and lung problems. The Duchess called the tot a ‘little smiler’ as she pulled faces to make her laugh. Kate added: ‘You’ve gone through a lot missy.’ Kate, who is known for her love of the high street, today proved her loyalty to affordable British brands once again by opting for a vibrant red coat from Boden – a firm favourite with middle class mums.

The royal, 36, wrapped up her baby bump in the £220 number worn over a custom-made peach dress, which she previously wore while pregnant with Prince George, and even braved chilly temperatures in a peach dress legs. On arrival, Kate was welcomed by nine-year-old cystic fibrosis patient Ava Watt who gave her two bears called Bernard and Wendy for George and Charlotte. Ava – whose godfather is Britain’s Got Talent star Paul Pots – said: ‘I really loved meeting the Duchess. ‘One of the teddies was called Wendy and one was called Bernard, I gave them to the Duchess.

‘They were for George and Charlotte. She said “thank you, that will be a lovely present”. I also gave her a thank you card.’ Her card contained a poem which said GOSH ‘gives hope to so many children and their families’ and described it as a ‘magical place’. Opera singer mum Kylie Watt, 41, has performed alongside James Corden in One Chance and said: ‘There’s been some ups and some downs. ‘She had a particularly bad year when she was two years old.

‘She loves coming to the hospital. She doesn’t see it as a negative at all. Despite everything she has to endure she loves it here.’ Ava’s also met Kate and said she thought the duchess found the visit ’emotional’. peaking about her daughter’s illness, she added: ‘There’s been some ups and some downs. She had a particularly bad year when she was two years old.

‘She loves coming to the hospital. She doesn’t see it as a negative at all. Despite everything she has to endure she loves it here. The Duchess was visiting Great Ormond Street Hospital (GOSH) to open the latest phase in the institution’s ambitious redevelopment project. Kate met with young patients and their families to hear about their experiences of the enhanced facilities in the completed Mittal Children’s Medical Centre.

The centre has transformed the hospital’s inpatient facilities and fulfils its goal of providing modern accommodation for all the young patients, and allowing parents or carers to stay comfortably by their bedside. It was completed over two stages, first the Morgan Stanley Clinical Building was created followed by the recently finished Premier Inn Clinical Building. The second clinical building involved redeveloping and refurbishing the children’s hospital’s cardiac wing and is now home to a new centre alongside inpatient wards for medical specialties like infectious diseases and cardio-respiratory.

During the visit Kate also met staff caring for young patients and talk to clinicians carrying out cutting edge research to help the most seriously ill children. The royal family has a long-standing relationship with the hospital with Queen Victoria becoming its first patron after it was founded in 1852. After officially opening the new building, the Duchess gave a short speech saying that she’d been very ‘impressed’ on her first visit to the hospital.

‘I’d like to thank you for having me here today,’ she said. ‘It’s been my first visit to great Ormond Street and I’ve been so impressed by everything I’ve seen and the scale of the work going on here. ‘It’s been wonderful to meet so many families and young people. I’ve been so inspired by their bravery and courage at such a difficult time. ‘My main message is congratulations to you all. It means so much to the families, both to the parents and children. You can see the real family element the hospital brings at such a difficult time.

motion – surely the children have been schooled in to not approaching strangers in this way…very distressing site !

Janie Melgoza – How I wish I could meet her,she is truly my inspiration.

Eric – What a beautiful woman, and she certainly seems to have a way with children doesn’t she?