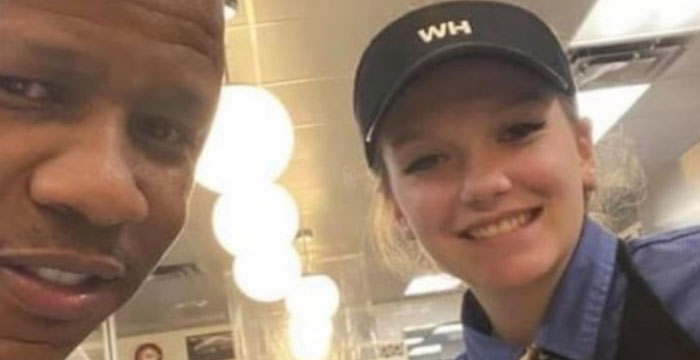 Hannah Hill was going about her normal work day at a Waffle House in Stockbridge, Georgia, when Eusebio Phelps, a local bishop, showed up with a hankering for some breakfast food. Eusebio str-uck up a conversation with the waitress, and the two of them instantly bonded. Little did Hannah know, he was about to change her life for the better! As they were talking, Eusebio learned that Hannah was pregnant with her second child, whom she planned to name Samuel. When Eusebio heard the name, he knew he had to do everything he could to help her out. After all, that was the name he had given his late son, whom he tragically lost seven years ago.

First, he tipped her the $40 he had in his wallet, but he felt that wasn’t enough. So when he got home, he and his wife set out to raise $1,000 so Hannah could buy whatever she needed for her kids! He took to Social media to rally his community, and by the time he woke up the next morning, he had already surpassed his initial goal. Thrilled, he set a new goal of $3,000, which was met almost as quickly! That’s when Eusebio took the donations to Waffle House as part of “a surprise baby shower for Samuel.”

Because the shower was spontaneous, Hannah wasn’t there at the time, but as soon as she got word to stop by, she headed over. While everyone waited out her 40-minute drive, someone threw out a new fundraising goal: $10,000. Sure enough, by the time she made it to Waffle House, they were able to give her a grand total of $12,000! Plus, Eusebio’s church is covering the costs of Samuel’s childcare for one year.

“I’ve been really stressing lately,” Hannah said later. “I’ve been worried about the baby getting here… I’m so grateful and that’s all I can say. I’m so grateful and appreciative to everybody, God is good all the time.” The sweet mom never even told Eusebio about her struggles! They simply bonded over kindness and a connection to their two Samuels.

That’s why Eusebio took to Social media to describe the en-co-unter as “a chance meeting but an appointed, ordained, and predestined moment.”

crystal wehrspann – With the way things are going in the world today, this is truly beautiful! Happy to see there still is good people out there!

Brand- E – Aww see we need more stories like this. This is happening all over the US and all we get is doom and gloom most of the time on the main streams…we want to see the great stuff! Not just the oh no…let me go hide stuff. The world is crazy. We need to heat the good things more