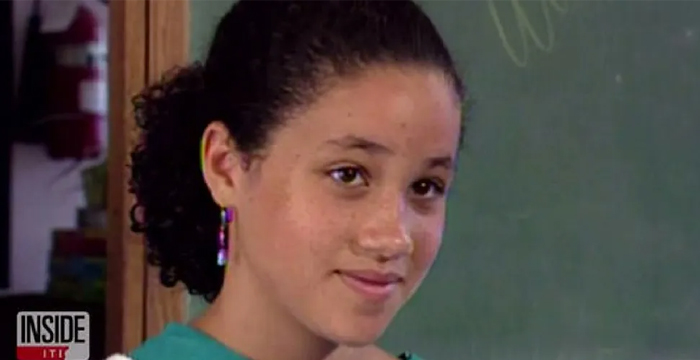 Meghan Markle has been a feminist long before the cause was a favorite T-shirt slogan — and there’s video evidence to prove it. Prince Harry’s betrothed was featured on a Nickelodeon news program in 1993 (Nick News fans where you at) for writing a letter to Procter & Gamble regarding the language of their ad for Ivory dish soap.

The original script read, “women are fig-h-ting greasy pots and pans” — a phrase Markle found s-xist.“I don’t think it’s right for kids to grow up thinking these things where just mom does everything,” she says in the recently resurfaced clip. “It’s always, ‘mom does this, and mom does that.’” In A-plus cursive penmanship (her future as a calligraphy enthusiast was crystal clear),

12-year-old Markle wrote a letter in which she requested that Procter & Gamble alter the language to “people” rather than “women” — and the company obliged. Speaking at a UN Womens‘ conference in 2015, Markle recalled the incident, saying.

“At the age of 12, I created my small level of impact by standing up for equality.” Watch below for footage of a pre-teen doing her part to dismantle the patriarchy, stay for the glorious ‘90s fashion.

NeoRipshaft – Hm… I actually have vague memory of that commercial changing… though memory is unreliable. But yeah 90s commercials were fairly openly s-xist, even I noticed that much.

Andy – This gives me creeps knowing Diana was still alive when she made this small difference. Atta girl.

Lalah61 – Studies show the vast majority of men don’t care what brand of soap they use, lol. It just has to be soap. Basically only women care about the brand. The market research was correct.

This Article Was First Published on hollywoodreporter.com