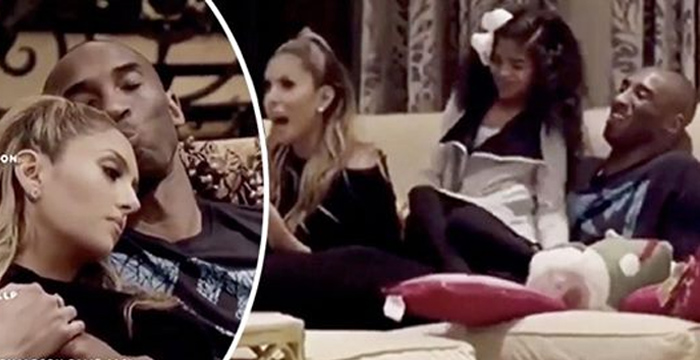 Her husband Kobe Bryant and daughter Gigi departed in a California helicopter crash alongside seven others on January 26. And on Thursday, Vanessa Bryant shared an excerpt of Kobe’s 2015 Muse Documentary, which featured the song XO by Beyonce. Vanessa wrote: ‘Missing you both so much,’ sweetly adding ‘even missing your “earthquakes”.’ Vanessa added, ‘Song is XO by @Beyonce,’ before adding the lyrics.

The clip of the documentary shows Vanessa and Kobe with daughters Natalia and Gianna hanging out and sharing sweet cuddles.The emotional footage shows the family of 4 playing a card game before he comes and kisses Vanessa as well as sharing a dance with Gianna.

Natalia hugs him and then he kisses Vanessa sweetly again; Kobe cuddles Gianna before she sits on his lap, next to Vanessa, and he playfully shakes his legs.The documentary, directed by Gotham Chopra, explored Kobe’s allies, rivalries and mentorships during his 20 seasons in the NBA. Vanessa, 37, has three surviving daughters with her departed husband, who was 41 when he left Natalia, 17, Bianka, 3, and Capri, seven months.

The footage comes three days after Kobe and Gianna’s public memorial at STAPLES Center, where Beyonce started up the proceedings performing XO and then Halo. She had told the crowd: ‘I’m here because I love Kobe and this was one of his favorite songs.

Fans noticed a slight change to the lyrics as she delicately changed the words to XO, swapping ‘crashing into you’, for ‘laughing into you’. And as she finished her second Halo, Beyonce spoke directly to Kobe’s widow. ‘I can feel it / He will be your / She will be your halo,’ sang the 38 year old, again changing the lyrics.

Introduced as ‘a very close friend of the Bryant family’, Beyonce directed her song towards the spot where Kobe’s wife Vanessa Bryant sat with her family. ‘I’m here because I love Kobe and this was one of his favorite songs,’ Beyonce shared. Pointing up to the sky, she added: ‘I want you to sing it so loud, they’ll hear your love.’

Clearly emotional, she nonetheless managed to smile as she looked at Vanessa.Beyonce had known Kobe and his wife since at least 1999, when he made a cameo appearance in Destiny’s Child’s video for Bug a Boo.

After Kobe’s loss, Beyonce shared her own tribute on social media, writing: ‘I will continue to diligently pray for your Queens. You are deeply missed beloved Kobe.’

Monday’s sold out service took place at the downtown arena where Bryant played for the Los Angeles Lakers for 20 seasons his entire professional basketball career. Vanessa offered a poignant portrait of her NBA superstar husband and their adored daughter at the sold out service.

Speaking at times through tears, the 37 year old praised her husband’s devotion as she addressed the thousands of fans gathered at Staples Center to remember Bryant and 13 year old Gianna. ‘God knew they couldn’t be on this Earth without each other,’ Vanessa Bryant said. ‘He had to bring them home to have them together. Babe, you take care of our Gigi.’

After Jimmy Kimmel welcomed the crowd, Vanessa remembered the family’s life with Gianna and her three siblings and then eulogized her husband. They had been together since 1999 ‘He was the most amazing husband,’ she said.’Kobe loved me more than I could ever express or put into words. I was angry. He was ice. Vice versa at times He was my everything.’

Vanessa was followed on the podium by basketball stars Diana Taurasi and Sabrina Ionescu. Kobe was a passionate advocate for women’s basketball, and Gigi was a promising young player.

‘If I represented the present of the women’s game, Gigi represented the future, and Kobe knew it,’ said Ionescu, the Oregon star who was mentored by Bryant.At the arena, fans were given a program containing photos, a purple KB pin and a T-shirt with photos of the father and daughter.

The concourse was a sea of purple, gold and black clothing Money from ticket sales was to be given to the Mamba and Mambacita Sports Foundation, which supports youth sports programs in underserved communities and teaches sports to girls and women.

A private last services was held for Kobe and Gianna Bryant in Orange County on February 7. Kobe departed on Sunday, January 26, 2020 after his helicopter crashed on a hillside in Calabasas, California alongside his daughter Gianna, 13, and seven others.

John Altobelli, 56, Keri Altobelli, 46, Alyssa Altobelli, 14, Payton Chester, 13, Sarah Chester, 45, Christina Mauser, 38, and pilot Ara Zobayan, 50. They were flying from Orange County to the Mamba Sports Academy, which he founded, in Thousand Oaks, California. He was set to coach his daughter in the Mamba Cup Tournament Series.