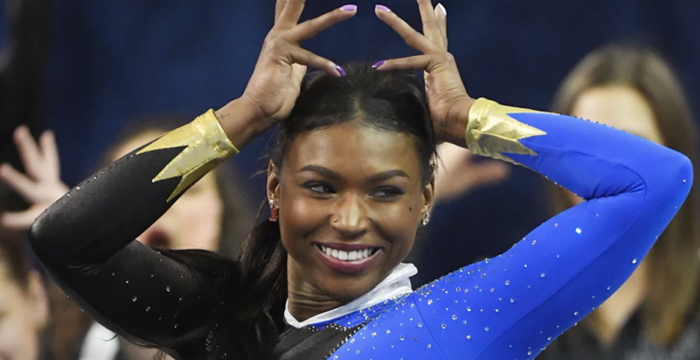 Move over Beyoncé, the internet is getting in formation for Nia Dennis’ sensational performance. After the UCLA Bruins gymnast wowed the juges at a NCAA women’s collegiate gymnastics meet last weekend, her floor routine — set to a powerful medley of Beyoncé hit songs — went viral. The college junior — who has made air-signing her name part of her signature stand-out floor choreography — took things to the next level with her one-of-a-kind Beyoncé mashup.

Featuring orchestral versions of hits like “Crazy in Love,” “Ego,” and even Destiny Child’s “Lose My Breath,” Dennis commanded the floor, mixing her stunts with some of the Grammy-winner’s famous dance moves. The gymnast changed her routine with a powerful strut across the floor, mimicking Beyoncé’s famous 2018 Coachella stage dancers.

A homecoming performance that would make @Beyonce proud! @DennisNia made us lose our breath with her 9.975 on floor exercise last weekend in Pauley.

Who else is crazy in love with her routine? ? pic.twitter.com/XE4VvTrZOK

As the routine continued — in between round-offs and jumps — Dennis can be seen doing the singer’s signature “Single Ladies” shuffle while incorporating traditional stepping movements. The 21-year-old —who celebrated her milestone birthday Sunday night — also creatively threw in the dab move and ended her routine by confidently placing an invisible crown on her head.

Dennis earned a 9.975 score out of 10.0 for her routine and was the first of three members of her team to achieve that high score for the Bruins, ESPN reported. And while the Beyoncé-loving gymnast was just short of a perfect score, her teammate, senior Grace Glenn, made history as the first NCAA gymnast to land a perfect 10.0 as the leadoff member of the UCLA team, according to ESPN.

The recent college graduate previously told PEOPLE she knew her routine was going well at the time, but she wasn’t thinking about her score. “I would have never guessed I have like senators reposting me,” she previously said, referencing the likes of California Senator Kamala Harris. “It’s just crazy and honoring.”