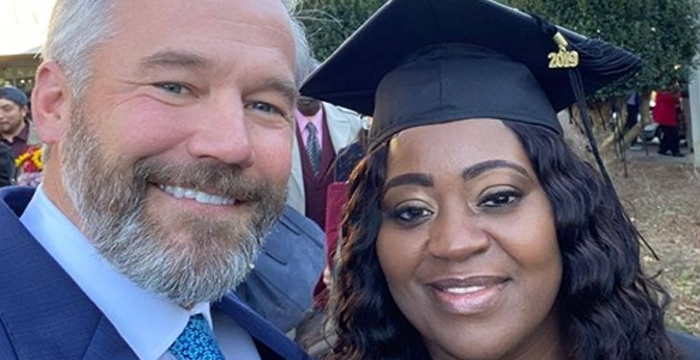 An Uber driver says she is one step closer to achieving her dream of becoming a lawyer thanks to a random passenger who paid off her college debt when he heard her life’s story. Latonya Young, a hair stylist by day and an Uber driver by night, told CNN affiliate WSB that she picked up a passenger outside of Atlanta’s Mercedes-Benz Stadium and the two got to talking. The 43-year-old single mother told the passenger that when she was 16, she had to drop out of high school to raise her first child. And more recently, she had to drop out of college because of a $700 balance that she couldn’t afford to pay off.

“Every time I got ready to pay the money, my kids needed something,” Young said, recounting the story to WSB. “I said, ‘OK, I’ll just wait.'” That was that, until few days later when Young got word that she was eligible to register for classes. The passenger, identified as Kevin Esch, had paid the balance. That allowed her to register for classes, ultimately earning an associate degree in justice. “Literally I was blown away,” Young said. “A stranger has never done that — or done anything like that — for me.”

With the balance paid, Young said she had to finish out her schooling for him. “I maintained my grades, As and Bs, just trying to make sure he knows I appreciate him,” she said. The two kept in touch, and Esch attended her graduation in December. He told CNN that Young is an inspiration and that he’s blessed to have had the opportunity to help her.

“There was something about Latonya that just — she resonates with me and we developed an incredible friendship now and I am incredibly proud of what she’s done,” he told CNN Full Circle. “I could’ve bought new clothes or I could’ve helped someone out. And what has come back to me has come back a hundredfold and I would do it 1,000 times over.”

Andrea Anne Jones, a spokesperson at Georgia State University, told CNN in a statement, “Kevin Esch has been justifiably applauded and heralded for providing the funds to enable Georgia State student Latonya Young to earn a college degree, but his gift is so much bigger than that. With it he has changed a life and opened a door to a brighter future for a student who, like so many others we see at Georgia State, simply needs a chance to achieve and succeed.” With her associate degree behind her, Young’s not stopping anytime soon. She will be back in class this month to pursue her bachelor’s degree with hopes of becoming a lawyer.

Debbie Hamilton Bogues – Great story, this should repeated headline! Much thanks to the passenger, with a kind heart, which made all the difference, not only to her but to her family. God bless him richly! My father said, it starts with a conversation.

Anna Smith – That was a wonderful thing he did. Wouldn’t it great if more people that was able to do this ,could be compassionate and help some one in need. No matter how much you have you can’t take it with you in the end.

James Climes – He gets invited to all cookouts and family reunions as a lifetime honorary Unk (Uncle). God bless him and God bless her. This is what compassion, love, and respect are all about

Andrea Richardson – This is an awesome story.it shows it’s not about black or white.God can use anyone to help you if you. That’s why it’s important to treat people right. God bless them both!

Beverly Woodburn – This shows that there are still good people out there. This works both ways for them. She gets her debt paid and he gets a tax write off. More people who can afford this should consider helping others.

Jane Kelley – What a story. I’ll be so happy when we don’t need to hear these all too infrequent stories of largess. I’m thrilled for this one lucky young woman, but the system needs changing…serious changes. ONWARD.

This Article Was First Published on edition.cnn.com