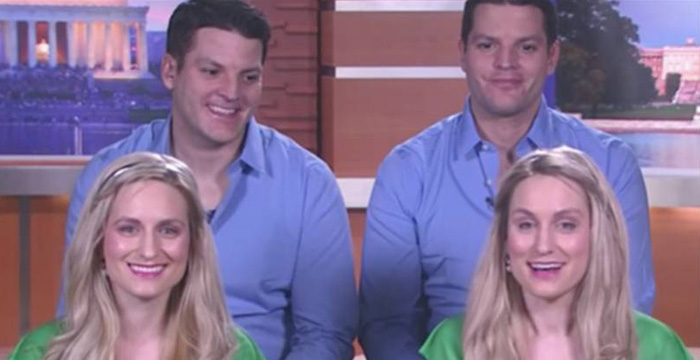 Identical twins Brittany and Briana Deane Salyers, who are married to identical twin brothers Josh and Jeremy Salyers, are now both expecting! The couples, who became well known to audiences after their appearances on TLC’s “Our Twinsane Wedding,” announced the happy news on Instagram Friday. “Guess what!!?? BOTH couples are pregnant!” posted the Salyers twins.

“We are thrilled and grateful to experience overlapping pregnancies and to share this news with you all!” In the accompanying photo, both couples posed in red outfits in a fun play on a “Baywatch” theme.

The brothers are saluting and holding life rafts and standing next to them are the sisters in matching bathing suits popularized on the show with the words “Baby Watch” emblazoned in white letters across their bellies.

The twin couples will experience yet another milestone together, after getting married in a joint ceremony at the 2018 Twins Days Festival in Twinsburg, Ohio. Brittany and Briana, 34, met Joshua and Jeremy, 36, at the Twins Days Festival the year before and their fairy tale weddings were captured on camera for TLC.

“Twice Upon A Time,” the Salyers captioned their wedding photos. “The Twins Married To Twins….” The couples wore matching attire and were photographed in mirrored poses on their special day.

The couples also opened up about the unique bond that their future children will share. “Our children will not only be cousins, but full genetic siblings and quaternary multiples!” they shared on Instagram.

“Can’t wait to meet them and for them to meet each other!” Since identical twins share the same DNA, the children of two pairs of identical twins are legally cousins but genetically more similar to siblings, which will make the Salyers one big family.

Earlier this month, both couples celebrated their second anniversary with a fun picture on Instagram.

“Our 2nd double-anniversary! One to remember,” they wrote. Alongside the caption is a black-and-white photo of the couples with a sign that reads, “Our 2nd anniversary, the one where we were quarantined,” referencing the naming convention of “Friends” episodes.

As unlikely as twins marrying twins and having babies at the same time may be, it seems like the Salyers were predestined to have their families together. “When we have children, my and Josh’s children will be genetic siblings to Briana and Jeremy’s children,” Brittany told People in 2018. “Even though they’re cousins, they’re technically genetic siblings. We imagine it will be like two moms and two dads all raising our families together.”

Samantha Rose Ford: “I wonder if the babies will look exactly alike or different?? I need an update in like 2 years lol”

Myra Josefina Delgado: “This is actually pretty cool. I hope we can get updated on the children I’d love to see how genetics play out.”

Stella I. Loy: “Ok so we grew up with kids that their parents were like this and their cousins looked exactly like them and it was really scary to me and I feel bad for admitting that”

Kiley Tom: “Really liked a gal who had a identical twin sister….but just felt uneasy ever asking her out. Like what if one day comes, and they switch around, then she gets mad i dont notice….i could never tell them apart they both even sounded almost rhe exwct same and if they tried they sounded exactly the same(put a blindfold on once and couldnt identify who was who.) That sucked, she was awesome”

Matt Anderson: “They’ll swap at some point, knowingly or otherwise.”

Kelsey Skrogstad: “Kaitlyn Leen there goes our idea. Leen with it rock with it…”

This article was originally published on the today.com