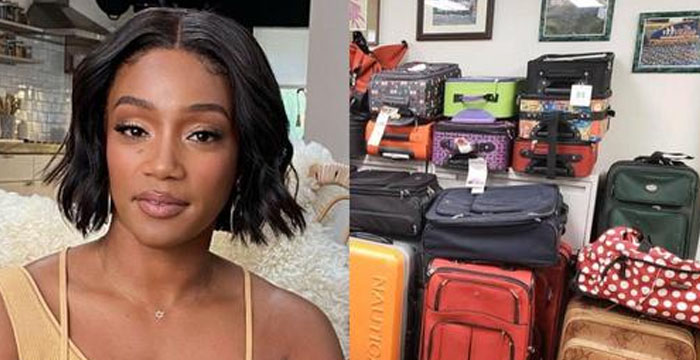 Tiffany Haddish was certainly feeling the giving spirit of the holidays this past December. Last month, the Indiana Department of Child Services made a post to its official Twitter account to thank the actress for making a donation of over 100 suitcases to be distributed during the holiday season. The idea for the donation came after the 41-year-old recounted some of her own experiences in the foster care system carrying her belongings in garbage bags.

During an appearance on My Next Guest Needs No Introduction with David Letterman, Haddish explained she had grown up in an especially turbulent living situation after her mother had been involved in a car acc-iden-t, forcing her to relearn basic living skills. After recovering from the acc-id-ent, her mother’s personality changed and she became more volatile with her children. Haddish said: ‘I used to think she was demonized. Like, I thought, like maybe somebody else jumped inside her body, like “where is my mommy?”‘

After experiencing numerous acts of aggression towards her and her siblings, Haddish moved into the foster care system, which she was reportedly scared by. Due to the family’s financial situation, the children reportedly resorted to carrying their belongings in trash bags as they moved from home to home, something that the comedian detested. After hearing the actress’ story, Shanell Manuel, a foster care specialist supervisor for Lake County, Indiana reached out to her, noting to The NWI Times that during her career she had seen the same thing happening with children in her care.

‘I’ve been in this agency for 18 years. I have been taking children out of homes and moving them to other homes, and…I see those garbage bags. It’s unfortunate that we still have to do that,’ Manuel stated. The supervisor then sent an email to the She Ready Foundation, a charity organization founded by Haddish that aims to enrich the lives of children growing up in the foster care system.

Manuel later received an email from the actress’ publicist, and a shipment of over 100 suitcases was arranged to arrive on December 11; they were later distributed to various recipients just over a week later. The Indiana DCS posted pictures of the shipment on its official Twitter account the day the products arrived and issued a message of thanks to Haddish for her donation. Indiana Department of Child Services Regional Manager for Lake County Ellis Dumas stated that the Bad Trip actress’ contribution to the department was especially effective in the sense that the suitcases would more than likely be utilized by all of their recipients.

‘Often, it’s hard to buy gifts for teenagers in general. So to be able to give them something that they’re going to be tangibly using is always phenomenal and awesome — Miss Haddish made that possible,’ Dumas said. The manager added: ‘The suitcases in themselves, and who they came from Miss Haddish, Tiffany Haddish, is a sentiment to our foster children that there’s success, and support out there.’

Anne Fessenden – What a kind, generous and very important thing to do for these special children!

Barbara Floeck Weyls – My mom grew up as a foster kid during the depr-ession. She was given a paper grocery store bag whenever she had to move. God bless Tiffany Haddish

Lisa Helm – I had a wonderful foster mom. She would go to garage sales and buy nice use suitcase, clean them up so when she got foster kids they had a suitcase to leave with. She hated when most of us left but she didn’t have a choice. She always tried to make our stay the best she could. Love her and her family, still talk to them

Sherry Phillips – Thats wonderful and a great idea for others to start! I worked in a facility where the majority of children came to us with their life stuffed in black garbage bags!!! How could they feel they mattered!!

Wendy Gogan – The night our granddaughter was dropped off to us by DHHS she had a small grocery bag with her belongings. It took while but we now have guardianship and she has all that she needs.