This Mom’s Viral Story Of Strangers’ Kindness Illustrates How It Truly ‘Takes A Village.’ 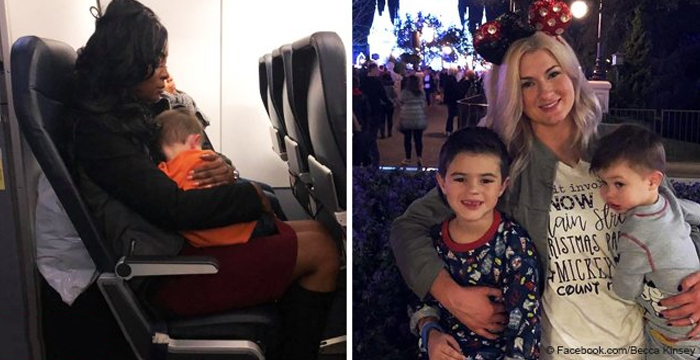 A Texas mother learned the hard way that traveling alone with two young sons was too tough a task — but she was overwhelmed with gratitude when three different strangers came to her rescue. Becca Kinsey, 31, from Dallas said she was ‘on the verge of tears’ at various stages of her trip last week, as she tried her best to wrangle her two-year-old son Wyatt and five-year-old son James through airport security and onto a plane. But every time she was about to break, a kind stranger would step up to help her, either letting her cut in line, carrying her bags, or even cuddling her youngest son to get him through the flight.

Becca posted about her journey on Social media on December 7, and her story has already been shared over 115,000 times. Recounting her trip, the mother-of-two said she thought she’d be OK taking her kids on a plane without her husband Blake, but was unprepared for how fussy they’d be. ‘We were standing in line in security, [and I was] on the verge of tears because Wyatt was yell and James was exhausted,’ she wrote. ‘Out of the blue, one mom stops the line for security and says, “Here, jump in front of me! I know how it is!”

While Becca was touched by the act of kindness, it wasn’t the last she encountered that day. After some crying and yell, ‘Wyatt fell asleep and I was trying to carry everyone’s carry-on when another mom jumps out of her place in line and says, “Hand me everything, I’ve got it.” ‘When I said thank you to both of them they said, “Don’t you worry, we’re going to make sure you get on that flight.” That second woman didn’t just help her get her kids and bags through the security checkpoint, either.

‘The second woman takes evvvverything and helps me get it through security and, on top of all that, she grabs all of it and walks us to the gate to make sure we get on the flight,’ Becca went on. Finally on the flight, Becca had everything in one place — but the drama didn’t stop. Clearly spooked or confused by the plane taking off, her youngest started yell again as they rose into the air. ‘Wyatt starts to scream at takeoff before he finally falls back to sleep,’ Becca wrote. ‘After about 45 min, this angel [pointing finger emojis] comes to the back and says, ‘You look like you need a break” and holds Wyatt for the rest of the flight AND walks him all the way to baggage claim, hands him to Blake, hugs me and says “Merry Christmas!!”

Becca also included a photo of the woman, sitting across the aisle, snuggling her youngest in her lap — and the little one looks quite content. Since her post went viral, Becca has began encouraging people to pay it forward by donating to Kidd’s Kids, a program for families of children with life-threa-te-ning and life-altering conditions.

Donnasue Sikes – It’s so hard to travel with one baby .I cried thinking it’s nice to know there still great people out there.

Alvin Orlando Aubrey – As a new mom and only my second time flying ever I was offered the same help from several people to my destination and back. I was absolutely amazed and thankful!

Candace Lynn Romero – I love this and I love when other women or moms try to help out another mom. All mothers have been in a situation or will be in a situation where you either hope for help or hope for a distraction long enough for your kid(s) to get sidetracked and/or forget about their tantrum.

Gemma Gem Gem – Just wonderful. it’s so nice when you are on a flight and you meet people who are just lovely like this. I’ve travelled with my 2 year old, and then my 3 & 5 year olds, to florida! So long flight. Both times my in laws were there and we tag teamed. It’s makes it so much easier.