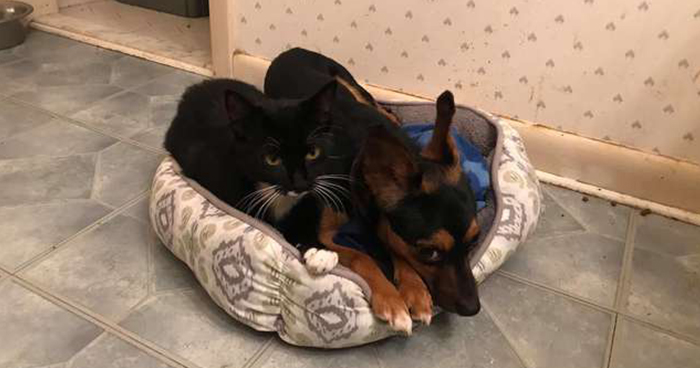 Dogs and cats are known to be enemies but sometimes these two species can become best of friends. The two adorable species when kept together as pets behave quite well and adjust to each other’s presence. However this is something rare in case of stray dog and stray cat. Recently a stray dog and a stray cat were spotted in between portable pot-seats at Hampton Soccer Park in Virginia. The dog was seen to be protecting the kitten and didn’t leave the kitten until they were rescued. Scroll over and take a look at their incredible bonding that will leave you amazed :

Two year old Chihuahua dog and 10 month old kitten were must have bonded while they were living in streets. They were found hiding between the pot seats and were rescued by a group of animal lovers. When the people from rescue team approached two of them, the dog who has been named as Gomez growled. It was obvious he was protecting the kitten, named as Morticia.

Angel Davis, one of the rescuers wrote on her facebook page, “Totally bonded…dog is growling if we get too close so we have notified Animal Control and are awaiting them to come. We are on both sides so they can’t go anywhere,” Once the Animal control reached the spot, two of them were taken to shelter. The two were inseparable, and that’s when “Turkan Ertugrul” the director of “Saver of Soul Pet Rescue” decided to keep them in her rescue.

Ertugrul brought Gomez and Morticia to her home from shelter. Two of them could be seen to be happy together in their new foster room. Etugral says Gomez is shy and nervous around people. She further said he opens up and is happier is when Morticia is around. Both Morticia and Gomez are doing well and will soon be neutered and sprayed. Ertugrul will then start searching for a home which will adopt two of them together. She says two of them need a special home where they are together.

It is although rare to see these furry animals together but looking at the bond between Gomez and Morticia, you will feel they are truly the soul mates. Watch the video here.