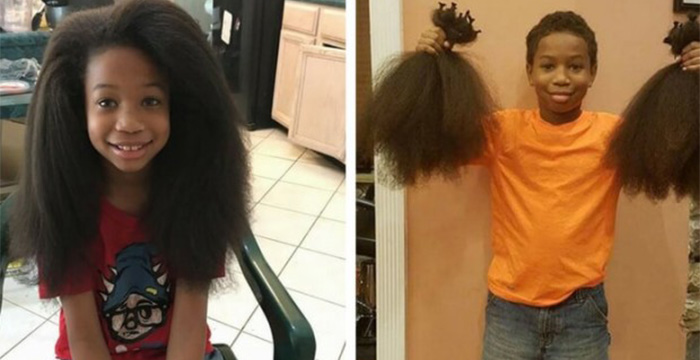 Sometimes it is the smallest of kids who have the biggest of hearts. Thomas Moore was only eight-years-old in 2014 when he decided that he wanted to grow out his hair to help young patients. Thomas got the idea after watching a video with his mom about a five-year-old girl who was suffering from can-cer and had lost her hair as he told Huffpost.

As a young boy, Thomas had a lot of questions about hair loss. His mother took the time to explain to Thomas all about chemotherapy and how it finisg the healthy cells in the body along with the harmful cells.

my nephew grew his hair out for two years to donate to kids with cancer ? pic.twitter.com/YuamNNcMEI

Thomas told Huffpost he wanted to do something to help the girl and others that are dealing with the loss of hair as a result of chemotherapy. So he hatched a plan to grow out his hair to be able to donate enough to make three wigs for needy children.

It became quickly clear how much his compassion touched the lives of many. After his aunt posted on her Twitter about Thomas’ kind gesture, the story quickly went viral. One user commented, “that’s the kind of spirit in children we need to see in more adults.”

Amber Ray told Buzzfeed News that it was not easy for her nephew to keep up with the dedication but that he went through with growing his hair for two entire years.

When he was ten years old, Thomas finally got his hair cut. The final result was 17 inches of beautiful locks. This was enough hair to make three entire wigs.