This 11-Year Old Has Helped 20,000 Homeless People By Giving Them “Blessing Bags” – Video 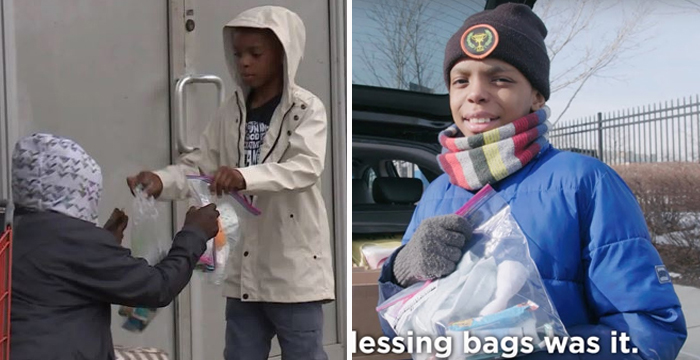 African excellence or excellence, in general, has proven so far that it is not constrained by age. Social entrepreneur Jahkil Jackson, from Chicago, had started helping people since the age of 8. Now, 11, Jackson is aiming for bigger goals. According to Today, Jackson has already helped over 20,000 homeless people in his city by giving away ‘blessing bags’ – through his organization Project I Am. He was 8-years-old when he had founded the organization.

Through the organization, he gave toil-etries, food, and water stuffed in what he called ‘Blessing Bags’ to homeless people in Chicago, Los Angeles, Washington, DC, Atlanta, Virginia, and Idaho. His efforts are not limited nationally. He has also helped people internationally, including those orphans in Mbabane, Swaziland, volcano v-ict!ms in Guatemala, and hurricane s-urv!vors in Florida, Houston, and Puerto Rico.

“Seeing people on the street made me really sad because I thought everybody had homes,” Jackson told Today. “When I’m giving the bags to people it makes me feel like I’m getting one step closer to dem-olishing the whole homeless thing… and it makes me happy to see the smiles on their faces,” Jackson said. According to Forbes, Jahkil also works closely with the non-profit organization, Dreams for Kids.

Tom Tuohy, a Chicago lawyer, speaker, author, and social entrepreneur founded the nonprofit Dreams for Kids, Inc in 1989. Tuohy and his team work with at-risk youth and those with d!sabi-lities. His work with youth inspired him to create an award-winning program that replaces charity with opportunity. Jackson, who was named a Youth Ambassador for one of the world’s leading anti-poverty organizations Heartland Alliance International in 2016, has also been acknowledged by former President Barack Obama as one of the three most influential people of 2017.

Basketball superstar LeBron James has also recognized him and helped promote Project I Am. Jackson, who loves basketball as a fan and a player, dreams of having his own NBA team one day. Moreover, Jackson continues to help more less-fortunate people in any way he possibly can. “There’s way more homeless people in the world that I could help, that I need to help.” “To know that someone like him knows my name, and supports what I do encourages me to keep moving forward every day,” he said in an interview with Forbes.

This Article Was First Published on storyhulk.com