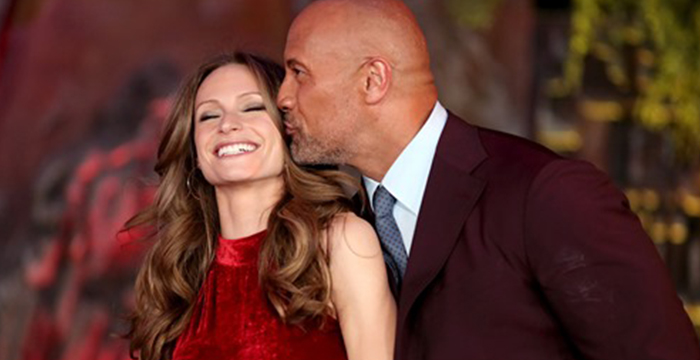 It’s hard to argue with the fact that Dwayne ‘The Rock’ Johnson and Lauren Hashian have a picture-perfect relationship. The power couple, who met in 2006 and became parents to two beautiful daughters before tying the knot in 2019, seem to have it all. Their love, respect and support for one another is evident, but it didn’t happen overnight. The duo’s unshakeable bond took work, especially from Johnson who was coming out of a decade-long marriage when their paths crossed.

Here’s what we can learn from The Rock and Lauren’s relationship:

1. His first marriage shaped him

Before Johnson met singer, songwriter and music producer Lauren Hashian, he enjoyed a decade-long marriage to Dany Garcia. It was that relationship (more specifically, its end) which informed and shaped the kind of partner and father he would become. Johnson met Garcia when he was an undergrad at the University of Miami and throughout their time together, she played an integral role in his budding career. As she told Marie Claire, she was “always in the background guiding him, giving counsel, and adding a business point of view to all the decisions.”

Despite their many successes in love and in work, they slowly began drifting apart and, by 2007, they called it quits. Rather than holding onto resentment or parting ways forever, the pair talked — a lot — and built a new kind of relationship. Not only did they remain close for the sake of their daughter, Simone Alexandra, but they also solidified an impressive working partnership.

2. He took a year to learn from his past

“We knew that we were moving into that period of our lives, the closing of a personal relationship,” Garcia explained to Marie Claire. In addition to being honest with themselves, open communication was imperative, so they got to work. As she explained, “We spent over a year looking at the things that didn’t work in our marriage, the reasons why, making sure those elements had been cleared and taken care of, and that we had a real understanding of respect.”

In 2008, Johnson asked Garcia to become his full-time manager and, in 2012, they took things up a notch, co-founding a production company called Seven Bucks Productions, which has since produced most of Johnson’s blockbuster films, from Baywatch to Jumanji.

3. Dwayne was open to love again

Given the healthy, admirable sp-lit that Johnson and Garcia worked so hard to achieve, it’s no surprise that the actor’s heart was open to finding love again. Even so, he couldn’t have predicted how quickly it would manifest itself. Johnson met Hashian in 2006 while filming The Game Plan and their connection was instant. He recalled their first on-set en-counter in a 2019 interview with WSJ Magazine, saying, “Within 30 seconds, I thought, ‘Wow, this girl’s stunning.’”

The timing wasn’t perfect, but he listened to the universe. “At the time, I was going through my breakup with Dany, and she was just coming off a big breakup too,” he continued. “Ironically, when you’re not looking for something, the power of the universe kind of takes over.”

4. He didn’t take his second chance for granted

In addition to being open to the connection, he was also appreciative of it. As Johnson told People in 2012, he never took meeting Hashian for granted. “I was so fortunate to have fallen in love once,” he noted. “To fall in love again? That’s a hard thing to do twice in the position I’m in. I’m one lucky son of a b.” The couple moved in together soon after that and by 2015, they had been living together for “like, eight, nine years” when they welcomed their first child. Daughter Jasmine Lia was born in December 2015 and followed by sister Tiana Gia in 2018.

5. She erased his fears

Despite their growing family, Johnson and Hashian didn’t tie the knot until 2019 after 12 years of dating. As it turns out, they had actually planned to walk down the aisle when they found out they were expecting their second child. Johnson joked with Rolling Stone, “Mama don’t wanna take wedding pictures with a big belly — Mama wanna look good.” So they rolled with the punches, but that wasn’t the only reason for the delay. In 2019, Johnson admitted to being apprehensive about walking down the aisle for a second time.

He still had his reservations. As he told WSJ Magazine: My divorce did a number on me. I wasn’t fearful of getting married again, there was just some hesitancy. Hashian erased his fears, however, by being the support system he needed. “Lauren was incredibly patient: ‘I love you, you love me, we have this amazing life together – no presh,’” he revealed.

6. She balances him out

If you haven’t heard a lot about Hashian over the years, it’s very much on purpose. As she told Vydia in 2017, “I love keeping a low-key profile and holding onto privacy and normalcy. Especially for [daughter] Jasmine, I don’t want to lose that.” For the happy couple, it’s all about balance. As Hashian noted, “Since my man spends much of his life in front of a camera, I’m a little more reserved with stepping out and being ‘out there’ as much.”

Despite all of his success, Johnson’s top priority is his family. He’s totally devoted to his wife — “Watching Lauren be a mom has been one of the most enlightening things I’ve ever seen,” he told People — and to his kids. When his third daughter was born, he noted, “Your crazy dad has many responsibilities and wears many hats in this big ol’ world, but being your dad will always be the one I’m most proud to wear.”

In 2015, he told Esquire he credits his family with everything good in his life. He gushed, “With all the cool s and success that I’ve been lucky enough to get? That doesn’t happen unless the home life is solid.” But that’s not the couple’s only secret for success. As Johnson revealed to People in 2016, “First of all, she teases me about everything. Everything. Nothing is off limits in our house. And it’s the beauty of it. And I tease her with everything.”

8. What we can learn from Dwayne’s journey

Going through a breakup is guaranteed to change your outlook on life and love, but the outcome doesn’t have to be negative. You can choose how the experience shapes you and whether it will be positive or negative. In the case of Johnson, he and his ex put in the work and through time and communication were able to build a healthy relationship. By doing so, the star opened himself up to new love while ensuring he wouldn’t repeat the mistakes of the past.

Magda Martinez: “That’s the way it should be. if you’ve ever been divorced you should look at all the things that happened in your marriage and not bring those into your next marriage. That’s exactly what I did which is why I’m so happy with my husband now”

Nick Yelanich: “If there has been one positive thing to come out of this COV-19 mess, it’s that celebrities are useless. We don’t need them. They mean nothing. When the chips are down, we are all just people.”

Tina Given: “Sometimes a marriage can be over long before a divorce is finalized. The headline may be misleading. Nobody knows what goes on behind closed doors except the ones living behind them.”

Miguel Ortiz: “I seriously can relate to that I reflected on my last relationship and I promised myself I wouldn’t keep secrets or make myself seem better than I am to get someone to fall in love with me because it always comes out in the most awkward ways, I promised myself to be honest and true in my next relationship if that ever happens”

This article was originally published on the goalcast.com