The Amazing 100-Year Transformation Of The “Perfect” Body 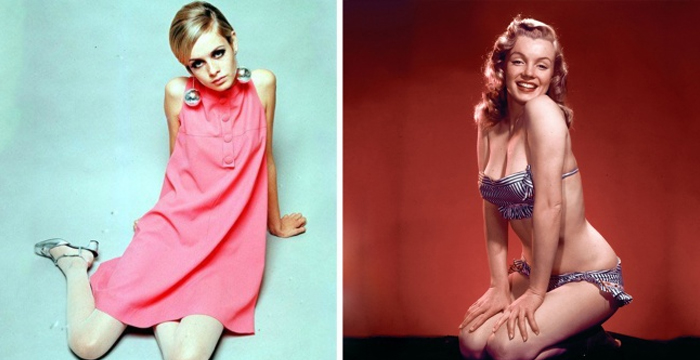 Throughout the 20th and 21st centuries, the mainstream idea of the “perfect body shape” for women has shifted almost as often as fashion trends. In some cases, the contrast of the perfect women idea between decades is shocking, and speak volumes to public attitudes at the time – the beauty standards, basically, depended on whether or not people thought it was okay for women to have personality.

Countless diets, pills, and celebrity icons later, we’re still going wrong in 2017 by encouraging women and girls to constantly compare themselves to others, rather than loving the female body in their own right. At the very least, however, we’ve come farther than using such beauty trends as cigarettes and Wonder Bread to slim down. Take a walk back in time with us, and marvel at the varyingly ridiculous expectations of the female figure over the years.

Camilla Antoinette Clifford was a Belgian-born stage actress and the most famous model for the “Gibson Girl” illustrations. Her towering coiffure figure defined the Gibson Girl style.

Alice Joyce was a well-respected actress of the silent film era. One film historian ranks her among the top models of 1910.

Jean Harlow was an American actress and also known for his personality. Often nicknamed the “Platinum Blonde”, she was popular for her “Laughing Vamp” screen persona.

Dame Elizabeth Rosemond Taylor DBE was an English-American actress, businesswoman, and humanitarian. She began her career as a child actress in the early 1940s, and was one of the most popular stars of classical Hollywood cinema in the 1950s.

Dame Lesley Lawson DBE is an English model, actress, and singer, widely known by the nickname Twiggy. She was a British cultural icon and a prominent teenage model during the swinging sixties in London.

Farrah Fawcett was the poster girl of this decade and waspish frames were on their way out. Fawcett began her career in the 1960s appearing in commercials and guest roles on television During the 1970s.

Eleanor Nancy Macpherson is an Australian model, businesswoman, television host and actress. She is known for her record five cover appearances for the Sports Illustrated Dress Issue beginning in the 1980s, leading to her nickname “The Body”, coined by Time in 1989.

Then came the 1990s – and Kate Moss. The supermodel and pin-up of her time, became known as ‘the waif’ and she and fellow catwalk queens such as Jodie Kidd popularised the ‘heroin chic’ look, which was gaunt with hollow eyes.

By the year 2000, the pearshape became even more marked, with the average waistsize having ballooned four inches in 20 years. The wasp-waisted Twenties woman would be amazed at the dimensions of today’s Kim Kardashian and Nicki Minaj, who champion the bigger is better mantra.

Actress Jennifer Lawrence, whose body is slim, and athletic, is often held up as an ideal body type for 2014.

The wasp-waisted Twenties woman would be shocked at the dimensions in 2020 Kim Kardashian and Nicki Minaj, who champion the bigger is better mantra.

Sarah Crawford – I don’t think the perfect female body has changed… the objectification of them has… but then again has it?

Rash Mctoucher – These things are decided by the fashion industry, not the general public, if u put a fit women of any shape bt basically slim in magazine and on TV men and women will lust after them.

Cheryl Zigmont Yatsko – To me this shows us all that we are beautiful. Our shape does not define us. I would like to see the male version of the “perfect” body thru the years. Lol

Kristy Cid – Shanna Wright remember my theory on when certain designers came out and how it affected the female figures, proven!!!!

Lena Wagenfuehr – why is there no mention of the artificial means used to “achieve” these shapes – the corset, the extreme diets and then the use of trick photography (precursor to photoshop)? Some poor teenage model in France came out and told of her constant hunger, only to see some photo editor added tone to her emaciated frame in post production!

Robert Walsh – Icons do not define values. Sometimes an icon gains notoriety by being the exception. For example take Twiggy. Had she been universally accepted as perfection the vixens that were also incredibly popular at the time would have been unknown.

Jonathan Wright – How the “perfect” female body has changed in 100 years: Shortened, became softer, wrinkled, dried, decomposed… 100 years takes it’s toll even on the most “perfect”.