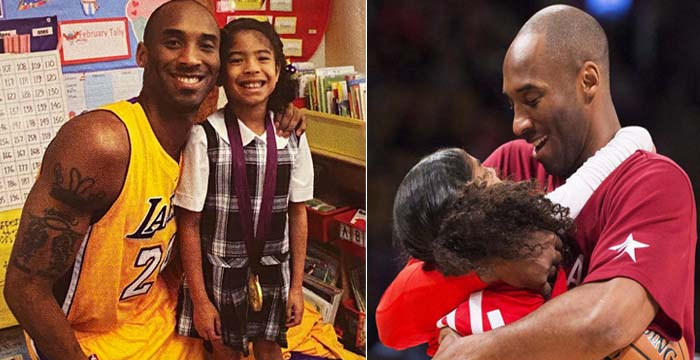 A picture of Kobe Bryant wearing his Los Angeles Lakers uniform in his daughter Gianna’s classroom shows the touching bond the father-daughter duo shared. The photo — part of a collection of personal pictures included in a pamphlet out to attendees of Bryant and Gianna’s Celebration of Life on Monday — shows the NBA legend smiling proudly next to his daughter, who is beaming while wearing his Olympic gold medal.

According to ESPN’s Dave McMenamin, the photo was taken as a part of Career Day at Gianna’s school. She may have been around 4 years old in the picture, The Blast reported. The sweet picture is another example of the connection Bryant had with Gianna, who had dreams of following her father’s footsteps and playing professional basketball before the Jan. 26 helicopter crash in which her, Bryant and seven others loss their life.

During Monday’s event at Staples Center, Vanessa Bryant made her first public appearance since the crash and gave a moving tribute to her daughter and husband.“She had the best laugh,” Vanessa, 37, said. “It was infectious, it was pure and genuine. Kobe and Gianna naturally gravitated toward each other.” “We will not be able to see Gianna go to high school with Natalia … we didn’t get the chance to teach her how to drive a car,” Vanessa continued during her speech. “I won’t be able to tell her how gorgeous she looks on her wedding day. I’ll never get to see my baby girl walk down the aisle, have a father-daughter dance with her daddy … or have babies of her own.”

Of her husband of 20 years, Vanessa called Kobe “the MVP of girl dads, or MVD,” and praised his “tender heart.” “He never left the toilet seat up,” she said. “He always told the girls how beautiful and smart they are. He taught them how to be brave.” The couple have three surviving daughters, Natalia, 17, Bianka, 3, and 7-month-old Capri. The memorial, of which the date honors Gianna’s No. 2 jersey at the Mamba Sports Academy, and Kobe’s No. 24 in the latter half of Lakers career, also honored suffer John Altobelli, Keri Altobelli, Alyssa Altobelli, Sarah Chester, Payton Chester, Christina Mauser and pilot Ara Zobayan.

Earlier this month, PEOPLE confirmed Kobe and Gianna were laid to rest. The date of disposition certificates obtained by PEOPLE was listed as February 7 at Pacific View Memorial Park and Mortuary in Corona Del Mar, California.