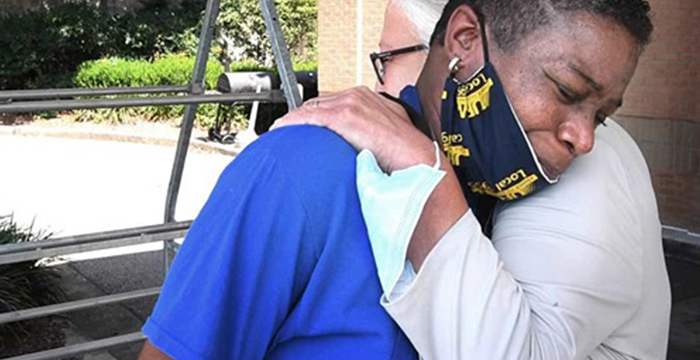 LaShenda Williams beams with gratitude every time she enters the Inglewood, Nashville, Kroger store in Tennessee. This is her workplace and a symbol of the new life she is building for herself. “Now, that is my home in there,” she said, gesturing to the store. “Those are all my babies. I have the time of my life every day.” Williams once lived in the parking lot of this same Kroger, after losing two jobs and her home in 2019. For a time, while living out of her car at the grocery store, she would come in during the day for food and conversation with the staff.

When she’d return to the lot each night, she would move her car so that nobody would know the severity of her situation. For Williams, homelessness was one more bout of adversity after a lifetime of challenges and failed systems. “I spent my life moving from foster care to foster care, dealing with child misuse and things like that,” she recounts. “In the end, nobody wanted me, and I stayed in the system until my senior year of high school.” Balancing a learning disability on top of an unstable family life, Williams spent most of her school years in special education, often being told that she was not smart or capable of maintaining an independent life.

“They told me I would not make it,” she says. When she graduated out of the foster care system, Williams moved from Mobile, Alabama, to Nashville, Tennessee, in search of her biological family. Unfortunately, this did not lead her to the loving relationship with her parents she had hoped for. “I wanted love from my parents,” she says, “but unfortunately, that was not the case.” In Nashville, Williams decided instead to venture out on her own, working odd jobs to support herself. Due to her learning disabilities, she found many employers would not take a chance on her.

She became used to uprooting herself each time a job would not work out, doing her best to maintain a positive attitude along the way. LaShenda Williams’ manager Jackie Vandal helped her throughout the interview process for the Kroger position. “I wish I had a whole team full of her,” Vandal says. “I remember being in a park one day after I lost those two jobs and I was just so tired; I was ready to give up.” Thankfully, she did not. “I prayed about it and just listened for that quiet, still voice to tell me what I needed to do.” After that prayer, she drove to her local Kroger in search of a kind face. As she walked around the store, she was moved by the warmth she received from the staff.

The friendly exclamations of “We’ll see you tomorrow, Miss LaShenda!” motivated her to keep coming back. “I was just looking for something to eat that day, and it turned into my safe place. I used to say to them, ‘You know I’m going to work here one day.'” At this, associate manager, Jackie Vandal told Williams about the store’s upcoming job fair. It was evident to Vandal that Williams was a people person; her captivating personality and warm smile made her a community favorite among staff and customers alike. Vandal recalls, “I really was just doing my job, hiring friendly people who I thought would be dependable.

I just felt like she had that warm, caring personality and she was so persistent.” On the day of the Kroger job fair, Vandal worked with Williams one-on-one to update her resume. “I just remember her calming me down,” Williams recounts through tears. “She just kept coming back and checking on me. No one had ever done that for me before — she made sure I had what I needed.” “When Jackie said, ‘You’re hired,’ my whole body just collapsed in her arms.” Williams pauses and takes deep breaths retelling the story. “I still get so emotional. When she did that, it just changed my life and I promised her that I’d work hard every day.”

Williams distinguished herself as soon as she started and within just a month, she was promoted from a part-time cashier to a full time check-out associate. A couple months after that, she was able to get herself a new place to live, which her new colleagues helped her furnish. The security of her new home and job have allowed Williams to explore her hobbies and interests for the first time in years. She says that one of her greatest joys is being able to cook in a space of her own.

Food is one of the tools she uses to give back to her community in the same way that they helped her. “From every department to the front end,” Williams says through tears, “they are my family. This is where I belong with my Kroger family and all my customers who are my babies. It just fills my heart with joy.” Jackie Vandal reiterates this same sense of family, saying that Kroger’s vision is to “feed America through food, inspiration and uplift.”

To her, that means doing right by people and giving people a chance to live safely knowing that they’ll see kind faces at their local grocery store. Despite all of the struggles she has faced, Williams has remained remarkably positive. Her recent good fortune, to her, is a testament to her belief that if one remains hopeful throughout difficulties, good things will happen. “If I could just put one smile on someone’s face or put a laugh in someone’s heart and tell them ‘I love you’ and ‘I’m proud of you,’ that’s what I try to do every day.”

Tina Fenton: “Thanks Manager you have a heart in the right place. I hope that this would prove that you are kind compassionate and not afraid to help the poor.”

Maria Henderson: “God bless you for being there for someone who really needed that extra hand and shown they matter.”

Lynn Lucke-Simpson: “Bigger issue why isn’t there universal basic income? This is not something that would hurt economies but stabilise them. If everyone has enough they spend.”

Kyra Renee: “This is the really lovely part of the story, my favorite part. So much appreciation: “She’s a fantastic worker, I wish I had 120 of her,” Vandal told WKRN.
“We are so lucky to have Lashenda as part of our Kroger family. Her uplifting spirit is contagious. She has made such a positive impact on her fellow team members, and so many customers as well,” Melissa Eads, a corporate affairs manager for Kroger Nashville Division told Today.
Williams says it is easy to be enthusiastic after everything that has happened.
“I was sleeping in a parking lot and looking for something to eat. Now, all my babies here love on me. No one abuses me, and no one calls me dumb and stupid. For the first time in my life, I finally got peace,” Williams told USA Today.”

Lynn Fromm McNaughton: “Such a good person is this manager! You have turned this person in the right direction by believing in her and empowering her to earn a living.”

This article was originally published on the edition.cnn.com, usatoday.com