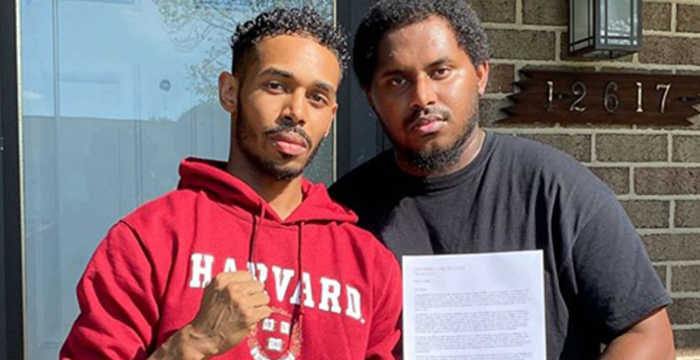 A college graduate from Maryland has been admitted to Harvard Law after continued adversity nearly made him abandon school altogether. After graduating high school, financial issues, illness and a major sports wound left 18-year-old Rehan Staton frustrated and exhausted as he worked to support his brother and father. However, neither his family nor his co-workers at the Bates Trucking & Trash Removal sanitation company could watch him give up on himself.

Today, Rehan is not only a college graduate, but is heading to Harvard Law School this fall. Rehan was born and raised in Bowie, Maryland. “Life was pretty normal until I was eight years old,” Rehan says. During that time, his mother left his father and moved out of the country. After she left, the previously stable household faced financial difficulties as Rehan’s father tried to raise his two sons on his own.

After years of private school and an otherwise “solidly middle class upbringing,” Rehan says, he and his older brother soon faced food insecurity while their father struggled to keep their house, often working two or even three jobs at a time to keep the bills paid. During this time, the family of three was ostracized by many of their extended relatives and had to rely on each other for support.

By the 7th grade, Rehan’s academics had significantly suffered under the pressure of his difficulties at home. “I wasn’t eating meals every day and my dad was working all the time,” he recalled. “Sometimes there’d be no electricity at home.”
Despite his fractured home life, Rehan found some solace in athletics and trained in martial arts and boxing. However, when a teacher recommended that Rehan be placed in remedial classes at school, his father stepped in.

At a local community center, his father met an aerospace engineer who offered to tutor Rehan for free for the remainder of the school year. “I ended up getting on the Honor Roll the rest of that year,” Rehan recalls. “The same teacher who suggested I be placed in special education actually wrote my dad an apology note.” Rehan continued to improve academically while training to be a professional boxer in high school. However, his dreams were cut short when he suffered a double shoulder wound in the 12th grade.

In a moment, his hopes of going pro after graduation were dashed. He hurriedly applied to a number of colleges before the year was out but was rejected from every school he applied to. “That ended up just not working in my favor,” Rehan says. “So, I ended up going to work as a garbage man.” “It was the first time in my life people were lifting me up for the sake of lifting me up and not because I was good at sports,” Rehan recalls.

All of his colleagues at this time, with the exception of senior management. Rehan’s colleagues eventually spoke to Brent Bates, the son of the owners of the garbage trucking company, about the smart young man on staff. Bates soon took Rehan under his wing and brought him to Bowie State University to meet a professor.

This professor was so impressed by his conversation with Rehan that he appealed to the admissions board on his behalf. Rehan began undergrad later that year and earned a 4.0 GPA. “I became the president of organizations. I was winning so many scholastic accolades — it was crazy.” By the end of his second year, Rehan decided he wanted to go to law school. As he reflects on his growth, Rehan credits his time as a sanitation worker for helping him see his potential.

It is not lost on him that some of the people now familiar with his story might view being a garbage man as a low point in his life. On the contrary, Rehan never felt more supported than he did during that time. “Throughout my entire life … all the people in my life who I was supposed to look up to were the ones who always downplayed me and made me feel bad about myself,” he says. “I had to go to the ‘bottom’ of the social hierarchy – that’s to say formerly sanitation workers — in order to be uplifted.”

The perception others had of him being a garbage man further engaged Rehan’s understanding of race and class intersectionality. These lived experiences inform his interpretations of culture and current events to this day. Rehan’s older brother, Reggie Staton, 27, was a Bowie State sophomore when his brother enrolled. Moved by the potential his brother had to flourish at school, Reggie dropped out to return to work and support his family.

Two years into his successful matriculation at Bowie State University, Rehan transferred to the University of Maryland, where he graduated in 2018. Over the course of the following year, Rehan worked in consulting with the Robert Bobb Group, a firm in downtown DC, while studying for the LSAT. He was accepted to law schools at Harvard, Columbia, University of Pennsylvania, the University of Southern California, and Pepperdine this Spring.

Despite cycles of adversity, Rehan has surpassed many of the goals he envisioned for himself. Just like the community leaders who helped him achieve his dreams, he now plans to help other young people with LSAT tutoring and college counseling. “When I look back at my experiences, I like to think that I made the best of the worst situation. Each tragedy I faced forced me out of my comfort zone, but I was fortunate enough to have a support system to help me thrive in those predicaments,” he said. Rehan will begin classes online at Harvard Law School this fall.

Beatriz Rustrian: “I’m proud for you and your accomplishments we also worked hard for what we have. But always thank God first we wouldn’t be here if it wasn’t for him. God Bless and keep moving forward. Good luck.”

Dorothy Robinson: “There is nothing down grading collecting garbage it’s a job. And I’m proud of him, his grades & I’m sure he’ll be a very good lawyer. Keep up the good grades & with your dreams.”

Helene Soursos: “Good luck and congratulations! Hard work is hard work no matter type of work it is. So what if he was a sanitation worker? There’s no shame in work”

Shenell D: “No doubt that he will exceed even his own goals. I pray for continued favor over him. I can’t wait to see him in court showing the world what hardworking, faith, humbleness, and determination will get you”

Denise Wilkins Smith: “He is the role model for the young black children or any child that when you live in the united states and you are afforded an education anything, and i mean anything is possible with hard work and determination. Great job young man. Do good things”

Judeline Hernandez:Judeline Hernandez: “It always pays to be humble , to endure challenges and always hopefull for goodness for everything you do. Work is not hard if it done with faith and good attitude ! Congratulations young man!!! Keep the good heart all the time”

This article was originally published on the edition.cnn.com