Stranger Places Hand On Boy Having ‘Meltdown’ On Plane, But Has No Clue She’s Being Photographed 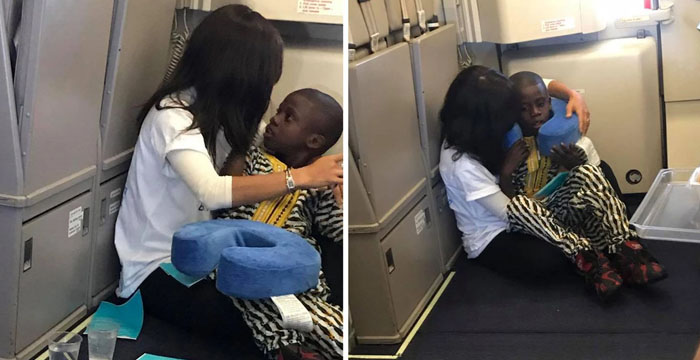 Many people have a phobia of getting on airplanes and flying. Whether it’s fear of the plane itself or fear of being trapped or even anxiety about being stuck in the air for so long, the prospect of a flight makes many people uneasy. Rochel Groner and her husband, Bentzion, were on an eight-hour flight from Brussels to New York City when suddenly, a young boy became distressed.

“He was crying and just started to shriek. It was clear to me that, just from listening, this was a child who didn’t have a use of a vocabulary. He was trying to communicate something,” Rochel recalled to Inside Edition, who referred to the boy’s unfortunate situation as a “meltdown.” After a few minutes went by and it became clear the boy wasn’t going to stop his “meltdown,” passengers became anxious.

“People are frustrated. People are waking up. It was a day flight, which is always a little harder,” Rochel said. “The phones [on the plane] just started to ring, so I’m getting thoughts in my mind we’re going to have an emergency landing.” Rochel decided she couldn’t just sit there and let it continue. She got up from her seat and walked to the aisle where the boy sat.

This Article Was First Published on littlethings.com