Starving Mother Stole 5 Eggs To Feed Her Family, Cop Brings Her 2 Truckloads Of Food Instead Of Taking Her In Custody – Video 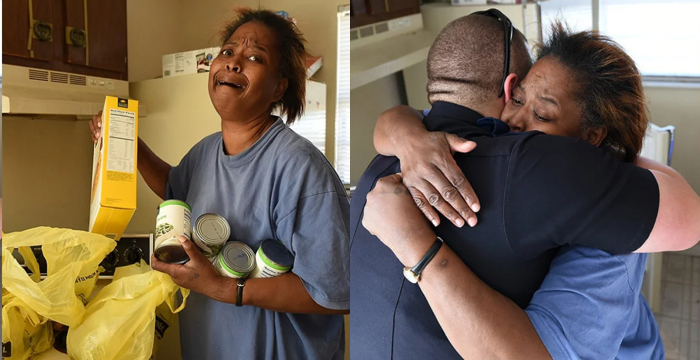 In the midst of decades of heated tensions between Black communities and po-lice, a beautiful story out of Alabama has arisen between an officer and an Alabama Black woman. Helen Johnson, a middle-aged woman in the city of Tarrant, received compassion from Officer William Stacy whose understanding, compassion, and act of kindness, went a very long way.

Helen Johnson shared a small Tarrant apartment with her two daughters, her niece, and her two grandchildren. As reported by AL.com, her daughters receive a monthly welfare check in the amount of $120 while she is on disability. The welfare check for the month was unfortunately lost in the mail. The family went without food for a few days, resorting in Helen to commit an act of desperation she neither intended nor stands by. With $1.25 to her name, she went to Dollar General in Tarrant on a Saturday thinking that would be enough to purchase a carton of eggs. She was, however, short by a few cents.

Unable to fathom going home empty-handed, Johnson reportedly proceeded to stuff 5 eggs in her pockets. But Johnson didn’t get far. “Of course when I put them in my jacket pocket they broke,” Johnson said according to AL.com. “I’m not a good thief at all.” She was then stopped by an employee who asked if she was the culprit, to which she admitted. The po-lice had already been called, and Helen was met by Officer William Stacy. But the story did not go as expected, where Johnson would be carried away in handcuffs, or worse. Instead, Officer Stacy went into the store and walked out with a carton of eggs which he gave to Johnson.

Unbeknownst to her, the store decided not to press charges on Johnson. Upon handing the eggs to her, a stunned Johnson began to cry and attempted to give him the $1.25 that she had. He refused. When asked how she could repay Stacy, he asked her simply to promise not to do it again. “Sometimes the best route is to not coustdy,” Stacy said to AL.Com. “I hope she won’t do it again. I pray she doesn’t, and I don’t think she will.”

Before Johnson got in her car to leave, she turned around to give Officer Stacy a hug, which was captured by a bystander and placed on Social media. Their warm embrace went viral on social media, and the act of kindness continued to pour in more ways. Soon after, Johnson was greeted by authorities who took her down to the station to share that she would be receiving more food, clothing, and toys from folks who caught wind of the story and donated to her.

The next day, two truckloads of donations were at Johnson’s doorstep. A grateful Johnson “just busted out and started hollering,’ said Johnson to Al.com. “I was yelling so loud. I would have been a good cheerleader.” Helen shared that she is forever grateful to Officer Stacy and will continue to walk the right path, vowing to never st-eal again.

Molly Weasley – I’ve sto-len food before because I didn’t have the money and food stamps take so long to get. I was denied ss disability because it’s their practice to debt everyone the first time. It was four months before I got the denial letter. Then they make you go through all these court hearings. Most people will get denied the second time as well. I had to give up and rely on a food pantry. My heart goes out to this woman. She’s trying to give her children and grandchildren the best life she can, which at this point is going to bed without stomach pains from hunger. I applaud this officer. He could have been ra-cist. He could have arr-ested her. Instead, he bought her eggs, and helped to get her more food to feed her family.

PassionateGoth – It takes a big heart to do something like this for someone you don’t know. Kudos to that officer. That’s what this world needs is more love and compassion.

leftatalbuq54 – Good job, Officer! It’s sad people are trying to sl-ap a rac-ial tag on this story. It has nothing to do with race. It has to do with human beings treating each other like human beings. Maybe the racists, no matter what color they are should use some of their energy doing some charity work instead of spewing the negativity.