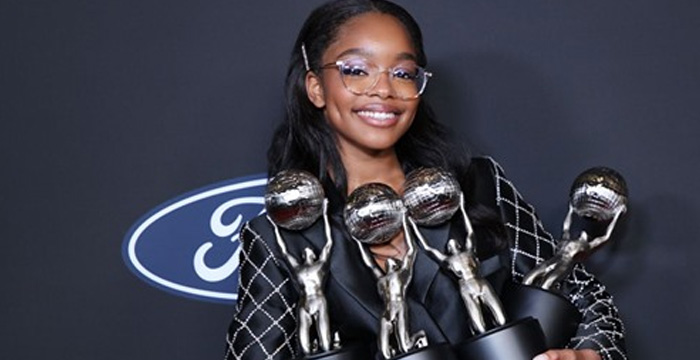 While her peers may still be learning to drive, Marsai Martin has reached a different kind of milestone. Martin, who is known for playing Diane on ABC’s “Black-ish,” has broken a Guinness World Record as the youngest Hollywood executive producer to work on a major production “It feels crazy, honestly,” Martin said in a video of her certificate presentation. “A world record? That’s insane.”

Although Martin is now 16 years old, she technically broke the record in 2019, as a result of her work on the film “Little.” She just wasn’t presented with this award — and officially declared a record-breaker by Guinness — until now. Along with producing, Martin also played a lead role in the film alongside actors Regina Hall and Issa Rae. In “Little,” a tech entrepreneur, played by Hall, wakes up in the body of her former 13-year-old self, played by Martin. “To be able to create a film, to star in it and be with your favorite stars, and actually seeing that entire experience was so amazing,” Martin said during the certificate presentation.

Martin reportedly pitched the idea for the film herself to “Black-ish” producer Kenya Barris, who also served as one of the producers of “Little,” when she was 10. After the pitch was accepted, Martin signed a deal with Universal Pictures, developing scripted projects, in 2019. Although she was not presented with the award until this year, the record acknowledges that she was 14 years and 241 days old when “Little” was released.

“She is not only tremendously talented in front of the camera, but offers a unique perspective as a creator and producer that will resonate with all audiences,” Peter Cramer, president of Universal Pictures, said in a statement to CNN. Martin will appear in the 2021 edition of the physical Guinness World Records book. In the meantime, Marsai’s production company, Genius Productions, is currently working on another film, “StepMonster.”

Kimberly Green – That’s Fantastic. Well as long as she is staying on top of schooling and Keepin those strong morales & values and not grow up to fast make room to do the teenage girly things

Erica Ty Caraway – This is so amazing! This young lady is very smart and talented. I loved her movie Little! Keep it up!!

Valerie Thierry – I am so proud of you little sister. And I love the picture of you. Congratulations you are so young and a big part of the future. You are going on to do amazing things maybe we can work together I am blessed with alot of talent

RT – I saw her on a show with her tv siblings. The three children (this was probably 3 yrs ago) were so polite and courteous I knew that they were very intelligent. This did not surprise me at all. I can’t say that I expected to see this headline, but I knew that I would be seeing them in my living room for years to come.

Audrey Morgan-Benson – I love Little it deserves some accolades, and I loved her in it.

jdmccrary – It takes a village and I pray yours keeps encouraging, supporting, and elevating your amazing talents and vision. Super duper congratulations and keep on breakingCongrats

erisbaker – Opening doors and breaking ceilings!! Celebrating you and your genius, Sis!

This Article Was First Published on edition.cnn.com