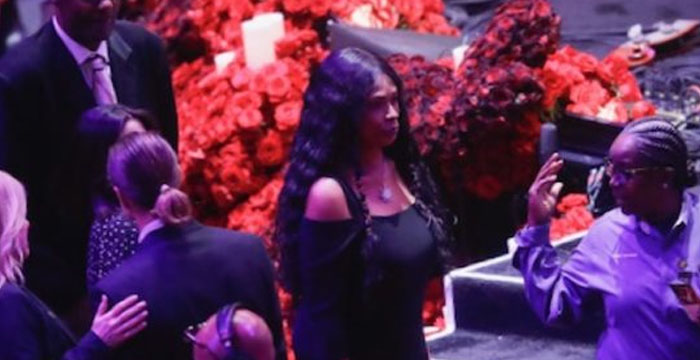 Kobe Bryant, his daughter Gianna, and the seven other suffer of a Jan. 26 helicopter crash were honored on Monday morning during a ceremony at Staples Center. This celebration of life gave fans and peers alike the opportunity to the loss of Bryant and remember him with some heartwarming stories. The memorial was viewed as beautiful and extremely emotional due to the multiples speeches. However, there were some that had mixed emotions following its conclusion.

While the majority of fans were focused on the touching tributes, there were others that had some questions for those that planned the ceremony. Why weren’t Bryant’s parents, Joe and Pam, mentioned on Monday? These fans believed that the couple didn’t receive even the slightest acknowledgment, and they were frustrated by that fact. Several fans voiced their frustrations on social media following the celebration of life. They were happy that Bryant and Gianna were honored on Monday morning but wished that Joe and Pam, as well as Bryant’s sisters, had been mentioned.

One Bryant fan initially mentioned Pam and Joe while saying that her heart aches for the parents of the late NBA icon. She was sad by the fact that no one had mentioned them during this long ceremony. To further her point, this fan posted an image of an old newspaper article about Joe. This story focused on Bryant’s father getting a coaching job and how it would impact both the girls’ and boys’ basketball teams.

The ceremony on Monday was viewed as beautiful, but there were still some unfavorable comments posted on social media. These fans didn’t have any ill intentions; they just wanted to highlight the important figures at the Staples Center. As many fans explained, Joe and Pam were the ones that brought Bryant into the world and taught him to love basketball. Why weren’t they mentioned by any of the speakers?

There were some users on social media that saw the tweets about Joe and Pam and responded by bringing up history. It’s a well-known fact that Bryant’s parents didn’t attend his wedding to Vanessa, and some users felt that this was the reason behind them not being mentioned during the ceremony. Other fans, however, know about the family history and feel that it shouldn’t have played a role in the celebration of life. In their opinion, Joe and/or Pam should have been included in the list of speakers.

Joe and Pam weren’t mentioned during the celebration of life event, which greatly angered many of the fans on social media. They felt that the lack of acknowledgment was shameful. There may have been some contention in the past, but the users on Twitter felt that this shouldn’t matter. They wanted to leave the issues in the past and focus on the important relationships.

The celebration of life on Monday drew considerable attention for the speeches by Shaquille O’Neal, Vanessa, and Michael Jordan, but there were some fans that also expressed frustration at the lack of mention of Bryant’s parents. Other fans noticed that the lack of acknowledgment extended to the massive video board that showed family photos during the ceremony. There were plenty of pictures featuring Bryant and Vanessa, but his parents were not included.

Monday was a very emotional day for all members of the Bryant family. Vanessa was sad the loss of her husband and one of her daughters. Joe and Pam were rue the loss of their son. There were several viewers that wanted to specifically mention Bryant’s parents and the pain that they were dealing with during the ceremony. This couple lost a beloved child, and the fans wanted this fact mentioned.

Following Bryant’s loss in the helicopter crash, the focus has been on his wife and three surviving daughters. However, there are fans wondering why other members of his family have not been mentioned. It’s as if his parents and sisters are invisible. “I tweeted the same thing! Acknowledge his parents and his sisters!!! SOMEBODY. ANYBODY,” another Bryant fan wrote on Monday. They were stunned that the members of Bryant’s family had not been mentioned during the ceremony.

This Article Was First Published on popculture.com