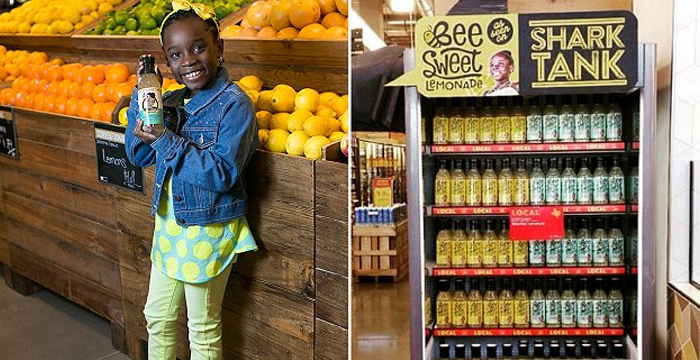 A brainy Texas girl has just made a sweet $11 million (£7.6 million) deal with 55 Whole Foods stores to carry her brand of lemonade. Mikaila Ulmer’s BeeSweet Lemonade will be carried by stores in Texas, Oklahoma, Arkansas, and Louisiana. Mikaila won $60,000 (£42,000) in seed money when she appeared on ABC’s “Shark Tank,” in which innovators pitch investors to win a pool of funding.

After the show she served lemonade to President Obama, was a part of Google’s Dare to be Digital campaign, and won numerous awards for food and entrepreneurship.

She uses a tasty mint, flaxseed, and honey lemonade recipe she inherited from her great-grandmother, and she gives a portion of her products to foundations that rescue bees.

Mikaila thought up the idea for BeeSweet when she was 4 and stung by bees — twice. “It was painful. I was petrified of bees,” she said in an interview with NBC News. But then she began to study them and “something strange happened. I became fascinated with bees.” That’s when she started cooking up a plan to use her great-grandmom’s lemonade — with honey — to raise money to help the bees. All that’s left now is the buzz about Mikaila’s drink.

Gabriel Ortiz – I’d buy that lemonade any day. This is the type of news we need to be hearing about 🙂

TheJellymonty – What a beautiful little girl. I’m sure the lemonade tastes as sweet as she is.

Mandy. – I read about her in the Time for Kids magazine titled Influential Young People. My teacher made us write a persuasive essay about one of the people on the pages speaking to our school and I chose Mikaila. She has a huge impact on ecosystems and nature. Love you, Mik!

Salome Sarkar – Congrats dr mikaila!! So happy for your achivemnts!!& feeling so inspired!Wish you all the best for your journey ahead!

This Article Was First Published on businessinsider.com