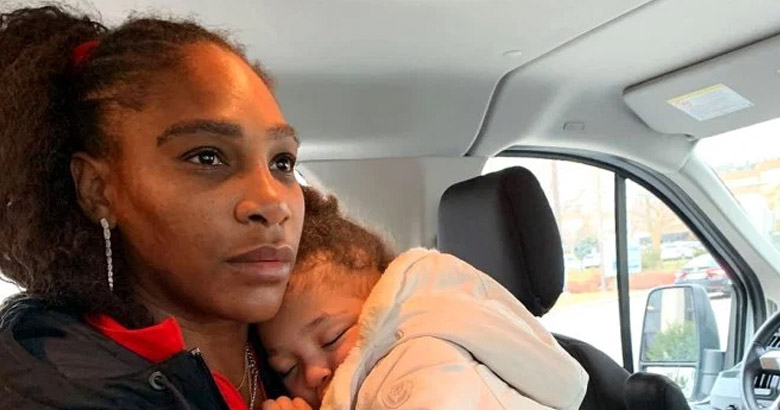 Always keeping it real! Serena Williams is one of the hardest working athletes in the game — but her challenges don’t end when she leaves the tennis court. Williams, 38, opened up about struggling with keeping her work life and home life in check while raising 2-year-old daughter Olympia with her husband, Alexis Ohanian. In a revealing post shared to Instagram on Friday, February 21, the tennis pro was seen cradling her little one in her arms in the back of a car and looking overwhelmed.

“I am not sure who took this picture but Working and being a mom is not easy,” she captioned the photo. “I am often exhausted, stressed, and then I go play a professional tennis match.”

She continued, praising the countless women who balance their careers with their lives as mothers. “We keep going. I am so proud and inspired by the women who do it day in and day out. I’m proud to be this baby’s mama @olympiaohanian #nofilter #nomakeup #nohairbrush #justme,” she wrote.

The seven-time Wimbledon winner recently admitted that her perspective on what makes a strong woman is vastly different after becoming a mother. Sitting down with Anna Wintour during New York Fashion Week earlier this month, Williams said she was endlessly inspired by the way moms take their responsibilities head on.

“My heroes have changed after having a child. My heroes are moms because women are superheroes,” she explained. “To have a baby and then have to go to work two or three weeks later or work a 9 to 5 … I’m fortunate to not have to do that.”

Williams recognized the large amount of privilege she has that allows her to spend more time with her daughter than the typical working mom, especially with her flexible travel schedule.

“I’m at a loss for words when I think of women who work day in and day out, providing for their families, when I know how hard it is for me to leave my daughter,” the athletic apparel designer said. “I never felt that way until I became a mom. I think women need to be recognized.”

Despite the difficult day-to-day life of being a working mother, Williams wouldn’t have it any other way. In September 2019, she gushed over her daughter and admitted, “She’s the best thing that’s happened to me and I’ve had so many amazing things happen to me, so … that’s really saying a lot.”

This article was originally published on usmagazine.com