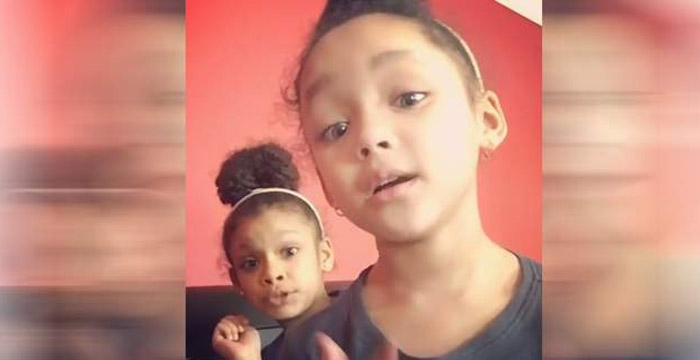 Dannah and Dani may only be 5 and 6 years old respectfully, but they have boy smarts way beyond their years. Enough that you may feel like taking a few notes, at least if you can stop giggling long enough while watching these two amazing Instagram videos! See, when Dannah started having boy troubles in school, she and her sister were happy to spell out the whole drama on camera with mom, Dani Lockett. In the first video, we learn that Dannah was cruelly rejected by her boyfriend at school, who “proposed” to a much older woman. A 4th grader!

Fortunately, her sister Dani has her back: “I think she need a better man than him!” But truly, you must watch for all the hand gestures and eye-rolling. “Empire’s” Cookie could pick up some tips from these little ladies. As their mom told NBC News, the Mississippi natives (who now live outside Atlanta) are about a year apart. They eat lunch as a pair in school and even have a special handshake.

“They had just gotten home from school and I was just asking how their day was,” Lockett said. “There’s an ongoing story where there’s this boy she likes.” She knew instinctively she had to film the exchange once she’d learned that Dannah had been dumped and shared the video with friends and family at the girls’ page on Instagram — but then it went viral. Perhaps in part because there’s a happy ending — and a second video, which in some ways is better than the first! The girls are clearly in their element as Lead Sassy and Backup Sassy and we get to learn just how the boy tried to make things up to Dannah, who wasn’t having any of it!

Lockett told NBC News that she asked the girls (who have two older teenage sisters) how they felt about the videos being seen as far away as South America and South Africa. Dannah remarked, “Don’t nobody care about that.” But then she asked if being famous meant they could skip school. Answer: No way! After all, if they’re not in school how can we continue to follow this schoolyard soap opera?

This Article Was First Published on today.com