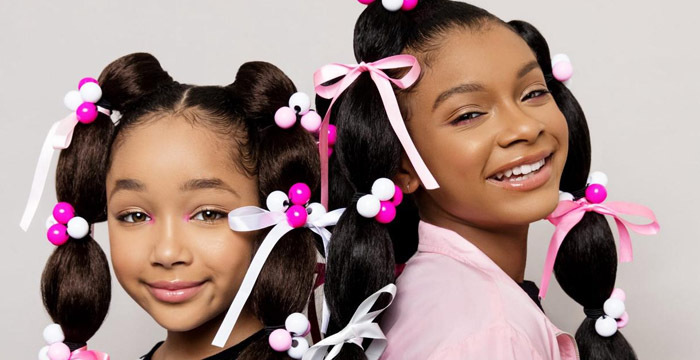 It has been a busy month for Dannah and Dani Lockett – between interviews, photo shoots, a trip to California and school, their social calendars are quite full. Not to mention, turning 6 and 7 years old.“I find it really exciting,” Dannah says. The Conyers sisters are having the time of their lives, thanks to the viral success of two videos about Dannah’s “break-up.”

In the clips posted on Instagram by their mother Dannella, kindergartener Dannah recounts how her “boyfriend,” who was supposed to “propose” to her, popped the question to a fourth-grader instead. “I think she needs a better man than him,” her older sister, who is in the first grade, says in one video. The next day, with hopes of winning Dannah back, he gave her a bracelet. She accepted the gift — but not him.

“You know, I guess in a kid’s mind, she is thinking ‘He didn’t wanna be my friend yesterday, so now all of a sudden he wants to be my friend. I’m not gonna let him just hurt my feelings and just come back with a gift,’” their mother explained. That clip she casually recorded turned them into a viral sensation garnering millions of views in the past month. It has made the rounds on every social media site and a few major TV networks like NBC and Fox. Artists such as Tyrese Gibson and Keith Sweat have reposted it and the girls have amassed thousands of followers on Instagram.

“I never expected it to do that,” their mother said. “I’ve been posting the videos of the girls forever. It has always been something but never anything like that. “It’s not necessarily about the video but their big personalities and how cute and sassy they are and how they can be so young but have so much personality.” Since their overnight success, the Locketts have been interviewed by national media outlets and had their clip featured on programs like “Today” and “Steve Harvey.”

“Many of you ladies are born, absolutely born with supernatural instincts,” Harvey said prior to airing their clip. “This little girl I’m about to show you in this video has it at a very, very early age.” The video has also been turned into a remixed song, and people from around the world are dancing to its tune and posting it on social media. Their family was also invited on the talk show “The Real” and flew to Los Angeles – the girls’ first time on an airplane – to tape the interview.

“It was really fun,” Dani said about their first TV appearance. “They were very nice,” Dannah added on about the show’s hosts. Their new-found celebrity also made them stars at their school — Fairview Elementary in Newton County. “People could not stop saying my name in the hallway,” Dannah said. “They were like ‘I love your video.’” “A teacher was like “Oh my gosh, I saw you on a video, I’m trying to get my girls to dance on your song,’” Dani added.

“And the principals took pictures with us,” they both exclaimed. Their mother says she hopes this episode helps her daughters venture into the entertainment industry. “The girls really, really, really, love the camera and since they were younger wanted the experience and the exposure,” she said. “They always say ‘Mama, when can I be on TV?’ and you know, as a parent, you don’t have that answer because it’s not that easy. So for them to actually be presented with this opportunity has been a real blessing.”

For Dani, this means getting into modeling and possibly being on the Disney Channel or Nickelodeon. Dannah, meanwhile, wants to one day host “The Real.” As for the boy who unknowingly brought them this acclamation: “He tries to sit by her every day, but he knows he is supposed to sit way ahead with the pre-k’ers,” Dani said. “He’s still trying,” her sister adds.

This Article Was First Published on rockdalenewtoncitizen.com