Remember Lavender From ‘Matilda?’ Here’s How She Looks Today! 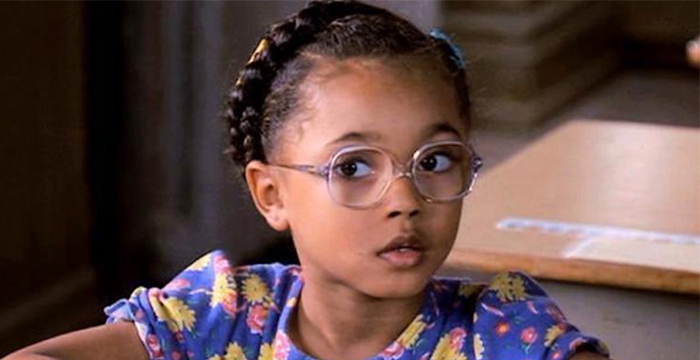 Kiami Davael, who played the adorable schoolgirl, celebrated her landmark birthday on Monday But it was her super-cool best friend Lavender who we all wanted to be. The adorable youngster became an unlikely style icon in the 90s thanks to her cool braids, floral dresses and kooky glasses. And, who can forget the laugh-out-loud moment when she put a salamander in Ms Trunchball’s water glass? Amazing.

So, it might make you feel a tad old to hear that Kiami Davael, who played Lavender in the 1996 film, turned 30 on Monday. The former child star celebrated her big milestone by posting a rather amazing snap on Instagram.

Kiami now looks unrecognisable thanks to her trendy topknot, silver hooped earrings and bodycon dress, complete with a daring cutaway around the bust.

After starring in the Roald Dahl movie, Kiami stayed relatively under the radar. She appeared in the the short-lived television series Conan The Adventurer, had a small role as Anna in the teen show Moesha and starred in comedies In The House and Grown Ups.

Kiami also appeared in the comedy film Bruno in 2000, her first big screen role since Matilda. The Californian-based star attended University of Kentucky and graduated in 2008 with a psychology degree.

It turns out she’s still close friends with Mara Wilson, who played Matilda, and she posted a photograph of them hanging out together last year.

Miriam Temesgan – The title should be what are the cast of Matilda doing tpday!

Coradora – I knew Lavender would grow up to be extremely beautiful !!

ZeroMind – Anyone else used to scream and cry when the principle threw the girl with braids in the air?! Just me.. ok

Grace Kendrick – When I saw the one about Pam Ferris I nearly sp-at out my drink, I had no idea that she played Sister Evangelina oh my god

This Article Was First Published on  thesun.co.uk