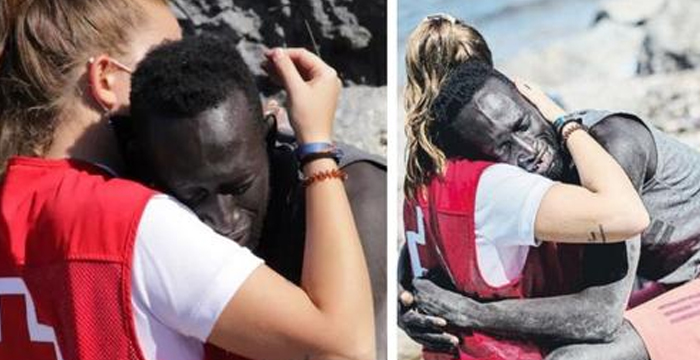 The incredible thing about the Internet is that just when you think it has completely let you down, it can turn around and completely make your day. Humanity is the same. When an unprecedented 8,000 Senegalese migrants made their way by water to Spain’s North African enclave of Ceuta, volunteers were unprepared for what they saw. Still, they were there to help, which is something that comes very naturally to empathetic humans.

Luna Reyes, a 20-year-old Red Cross volunteer, showed her natural instincts and humanity in a viral image of her hugging a Senegalese migrant. “He clung to me. That embrace was his lifeline,” Reyes remarks. The man had just arrived onto Spanish soil, was visibly exha-usted, and Reyes helped him over to be seated and then offered him water. After she attentively gave him the water, the two hugged and the man began to cry. Luna has described the hug as “the most normal thing in the world.”

The moment went viral. However, while most would see the incredible love for another human being and representation of humanity in the photo and video, trolls did not. Spain’s far-ri-ght Vox party and those who were displeased by the news of the arrival of thousands of migrants flooded Luna Reyes’ social media accounts with hat-eful words and ab-use. “They saw that my boyfriend was Black, they wouldn’t stop insu-lting me and saying horr-ible, rac-ist things to me,” Luna says of the experience. Reyes has since had to set her social media profiles to private.

However, the Internet did not stand for the ab-use and brawl back in support of Luna. The hashtag #GraciasLuna was born, and supporters all over the world, including public officials, sent messages of praise and love to Luna. Rita Maestre, a city councillor from Madrid tweeted, “We will not allow hat-red to win.” Maestre continued, “Those of us who see this embrace as a symbol of the best of our country outnumber the others.”

The trolls may have intended on turning a beautiful global moment into a tarni-shed experience for the woman at the centre of it, but they failed. Humanity rose to the occasion in the moment captured by the photograph, and then it rose to the occasion again through the form of public support. The #GraciasLuna moment, is more powerful than negativity brewing trolls. That is because it is fuelled by love. Haters will always hate, but love will always conquer all.

Diana Marley – God Bless her for showing kindness & compassion to this man at a time in his life! I wish there was more of this spontaneous, uninhibited compassion here!

Carol Parris – The young man was exh-au-sted by his ordeal. He looked great full to be alive. Her kindness was from her compassion for a fellow human being.

Patricia Hutcheon – Her heart is puré every creed and race find an equal place in her heart blessings to her.

Rachel McKill Biffen – Let’s all be na-sty from our safe little rooms in our safe little houses with our safe jobs and our safe lives with plenty of food and plenty of support and help! These poor people who would rather put their lives at risk to feel a little bit as safe as you need kindness, support and understanding. We are all human FFS!

This Article Was First Published on goalcast.com