Rapper T.I. Says Women Who Do Not Give H**d, Do Not Deserve Marriage, Claims Women Who Refuse Will Never – Video 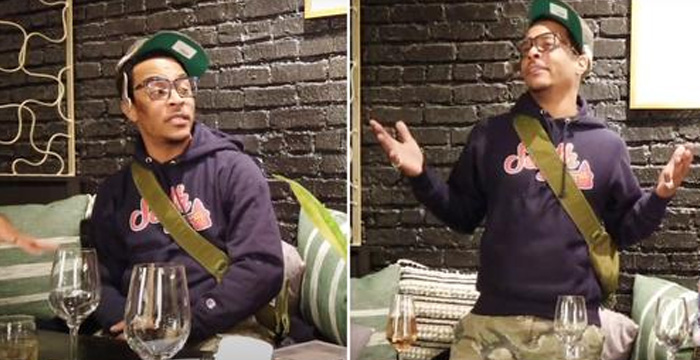 T.I. continues to share his opinions as it pertains to women. Maybe he feels he’s the “lady whisperer” in real life, but more often than not his comments bring more backlash than praise. His recent appearance on the first episode of the What She Said podcast entitled “Marriage, S-x, and Parental Guidance.” Within the conversation, Clifford “T.I.” Harris shares that a sense of misogyny is what women look for in their choice of men.

He added, “That provides a vibe that you are obviously attracted to,” he continued. “It puts out pherom ones, you understand me? And them pherom-ones cause you to be attracted. And I’m not saying that it’s right to be this way or that it’s wrong to be this way, I’m just saying the fact that it is this way. I’m not trying to excuse, merely explain.” At around the 22-minute mark on the video, things take an turn when the rapper declares to the other ladies in the conversation that women who don’t perform or-al aren’t deserving of being wives. Stammering, he begins, “I.. Don’t know where to start with this one.”

“This is not it,” says one of the women. It is then that T.I. makes his statement. “Women who do not give h-d don’t deserve to be married!” said the rapper. “I said that… That’s my own lil’ opinion.” The ladies ask him if that’s his final answer, to which he affirms that it is. He further feels that the man would proceed to fulfill that desire elsewhere. Adding on to his “good information” he continued, “To be honest with you, if you are my everything – that means everything I need – it shouldn’t be nothing happening anywhere else that I can’t get here at home. Nothing! I don’t care what it is.” He then proceeds to list what he feels should not be off limits in relationships.

Carlton Penn – I’m sure his wife is disappointed of his comment : it was very disrespectful and for a man who have a daughter(s) he’s not showing a good example of being an father

Cheryl Smith – Likewise the men….some of you men can’t even please a woman in bed but want h-d. Can’t even stand for 2 minutes you have to be pumping it like for it to work a little. kmt

Dee Ledbetter – sad, I’m glad that’s why I stayed single. That dk’ wasn’t really made for the mouth. It was for pee’n and multiplying…

Antonio Cortinas – It’s funny how many ppl keep they single mindset while trying to be in a relationship.

Regina Hayes – I like T. I., but I think he should not put his bedroom business out like that. To me that’s disrespectful to his wife and a lack of maturity to voice that what expects out of his wife. Also, she doesn’t know where that head of his has been Plus, what if a guy made that ignorant comment to his daughter, I believe he would be piss=ed.