Rapper Boosie Badazz Teenage Son Has Twins On The Way, Rapper Believes His Son Was Tra-pped: “They Been Trying – Video 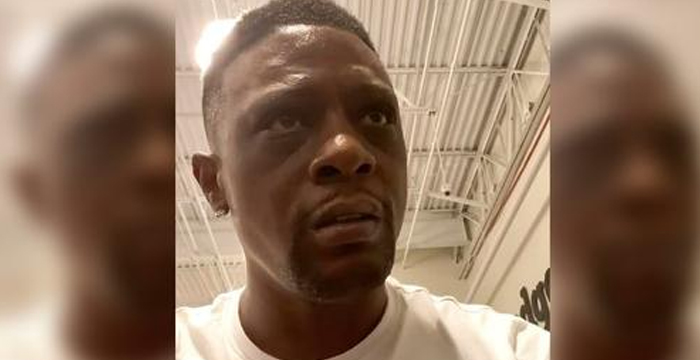 Is rapper Boosie Badazz about to be a grandfather? Depending on who you ask, the answer is yes. According to him, however, that’s a big no. As a matter of fact, don’t ask him about it. Boosie Badazz, real name Torrence Hatch Jr., is no stranger to controversy. As a matter of fact, he spent a good portion of 2020 being start off of Instagram for the content he posts. Recently his comments on Lil Nas X have had tongues wagging for their nature.

Not long ago, the “Show Da World” rapper was invited to The Breakfast Club to speak on the backlash surrounding the comments. During the interview, Boosie had the opportunity to speak to comedian Flame Monroe as a way to educate the rapper on his comments and to try and bridge Boosie Badazz and the LGBTQ community. In the midst of this, Boosie Badazz revealed that his son is being charge of fathering newborn twins.

Host Angela Yee asked the rapper, if he was scared of his son, 17-year-old Tootie Raww (real name Torrence Hatch as well) imp-reg-ating various women. Boosie Badazz shares that “hyp-oth-etical” is an actual current situation that he is dealing with, and denies being a grandfather as he feels Tootie is being tra-p-ped. “This been worrying me,” says the rapper. He then paints both the woman and her mother as liars. “I don’t think she’s pregnant. I think they’re lying. Her and the momma tryna get my son.” Boosie Badazz goes as far as to say the woman has edited photos to make this pregnancy look real.

According to Boosie, his son and the woman, who is rumored to be a singer by the name of Ramya Hall-Johnson, or “Ramya J”, do have a history. “They’ve been trying to get my son since he was 10,” Boosie claims. “Yeah, she did a video way back with him. She was 11-years-old, she had 13-inch weave in her hair.” Interestingly enough, Boosie Badazz would years ago receive intense backlash for bragging to his social media followers that he is “training” his son right by hiring a woman to perform a s-x act on him. “I’m training these boys right, I’m training these boys right,” said the rapper on Instagram Live. “Ask any of my nephews, ask any of them… ask my son. Yeah, when they was 12, 13 they.” It’s giving very much, double standard.

A post shared by The Neighborhood Talk, LLC (@theneighborhoodtalk)

Shay Walker – But he the one teaching them that its okay to sleep around…he seriously didnt expect this at all?!?

Shelita Salley – He should encourage his son do the right thing and marry the girl. That’s what our grands and ancestors did. The single mother stats were lower under this way.

Angel Wise – Trapped how exactly? He knew what the consequences was. I hate the ” she trapped me” or “she trapped my child”. How? You are responsible for yourself. He sm-as-hed raw or a defective or a lie about b-control. You have to hold your son accountable. All young men who bla-me the women