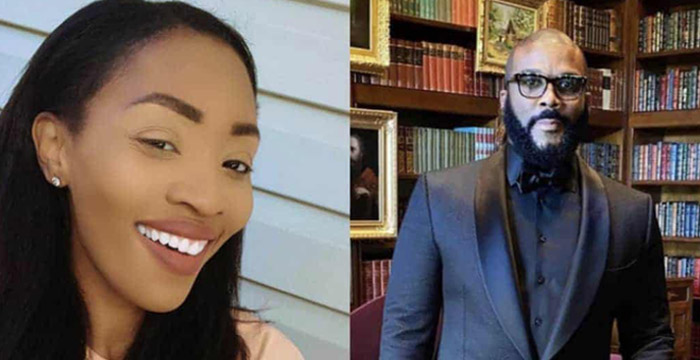 If “by any means necessary” was a person, it would for sure be actress Racquel Palmer! Back in 2019, Racquel went viral after she purchased a billboard with a message to Tyler Perry. Although Perry initially shared a photo of the billboard saying it was “not the way to get [his] attention”, it looks like her creativity and perseverance worked in her favor.

Racquel recently revealed to that she officially landed a leading role in Tyler Perry’s upcoming series, “All The Queen’s Men”, which follows the life of the owner of a male stick club and her loyal head of security. Y’all have probably seen Racquel’s face in another TP show called “Sista’s”, but according to Racquel, her and Tyler have never spoken about the iconic billboard. “There’s many interactions with him as far as directing,” she said. “But we’ve never spoken about the billboard. It’s just actor and director relationship. So it’s just like it never happened.”

Perry’s initial reaction urged people to save their money, as billboards are pretty pricey, and encouraged hopeful actors and actresses to pull up to auditions for free. While the billboard may have played a role in jumpstarting Racquel’s career, she expressed she wants to be known for what she brings to the big screen instead of the viral “stunt”. “One thing I did learn was that I want to be known for my talent, not my tactics,” she said. “I don’t think everybody really understands the whole point of the billboard is that I wanted to show my kids that I wasn’t going to give up on my dream. I was at a point where I wanted to, but I didn’t want them to see me give up.”

Keneisha Mosley – I’m happy for her. Getting any job out here is rough. A lot of times you have to go the extra mile to get noticed.

April Harris – I was going to say she better be able to act after all that but that doesn’t seem to be a requirement. Love Tyler though

Maurice Dockery – Sounds like Covid helped Tyler Perry be more humble. He did a look back and what he Initially thought was too much now he is embracing.

Vinnis Bryant – “It’s not the way to get my attention” while it captured his attention and caused him to respond to it. Go head Queen. Do what you do! Unorthodox, but it definitely worked