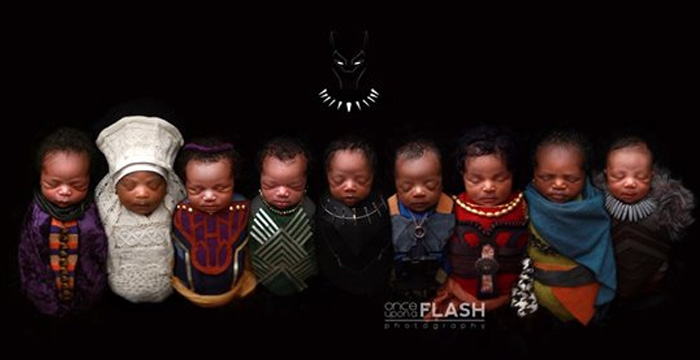 It is not yet clear if Wakanda had a nursery, but if it had one then the photos of the kids there would be like the one that is shared by the photographer Kennisha Fisher. She has released a series of the photos titled as ‘’Wakanda beginnings’’ and it has been the most adorable yet powerful photography series ever seen by us.

In it there is a group of nine newly born babies in a line that are clothed in clothing similar to what Ruth Carter created for Black Panther.

As a mother of five black boys Fisher told that because of these five boys she was inspired by the representation and pride that she felt after viewing Black Panther. It was an opportunity to see the nine newborns dress up in the Wakanda attire as the citizens of the state.

She stated that she was constantly seeing crerative images that had reflected the current culture. She had seen babies dressed up like super heros, the Disney Princess, cake smashes and birthday parties of every imaginable cartoon.

It was rare that anything representing the Black Panther comes across her screen even with that popularity. After Black Panther was nominated for the Oscars, Fisher began to ideate around what a series featuring newborns would look like.

She further stated that she drew a sketch of what each character would look like as a swaddled baby and shelved it for a few weeks, realizing it was a massive undertaking.

After the movie both shined, and in her opinion was snuffed, at the awards show. She pulled her notes back out.

She tells us that she is not seamless, and that it will be hard to believe that she had hand made each of the costumes that are seen in the photo.