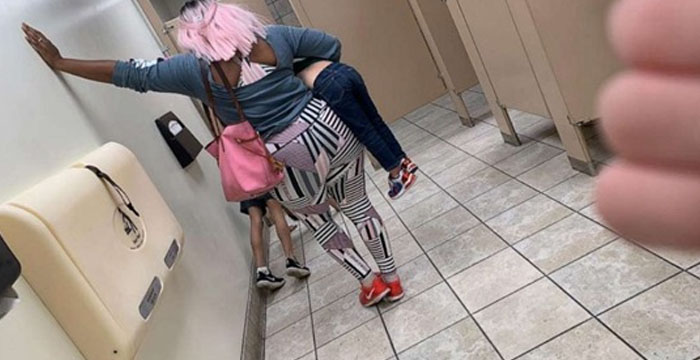 When a Texas mother walked into the bathroom of her local Hobby Lobby, she encountered quite a sight: Another mother ordering her fresh-talking son to do push-ups. Molly Wooden, 24, said she was at the craft store in Killeen, Texas when she spotted the other mom doling out her no-nonsense punishment, and quickly snapped a photo to share on social media, along with her encouragement.
‘We need more parents like you, who aren’t afraid to parent their own children because of what someone else might think,’ she wrote.

The image was taken from behind, without the other mom’s knowledge, with her face and the face of her children obscured. The other mother is holding one child on her pelvic, casually leaning against the wall while she observes her other child on the floor doing push-ups. ‘To the woman in the Hobby Lobby bathroom. If my hands weren’t full of children I would have applauded you,’ Molly wrote.

‘As your son gave you the back talk of the century, you stayed calm and collected while adding 10 more push-ups to his already growing number. ‘He said, “Mama, this is the bathroom floor, gros.” She said, “Maybe you shouldn’t have been acting obnoxious.”’Random woman of Hobby Lobby, I love you,’ Molly concluded. ‘Keep on raisin’ them boys right!’

The post has gone viral, earning 53,000 likes and 10,000 comments some negative, but many positive. ‘Love it, kids these days need to learn respect,’ wrote one mother, while another chimed in: ‘Way to go mom! More parents need to actually parent their children and stop trying to be their friend.’ ‘This is awesome, people may find this mean but doing this will teach a child respect, and some kids these days lack respect! Keep up the work mama!’ said a third.

Molly later updated her post, revealing that ‘through the power of social media’ she and the other mother have connected on it. ‘She promptly thanked me for posting this, says she appreciates the support and positive comments, and we’re hoping to grab coffee sometime while supervising push-ups, that is,’ she wrote. Speaking to ABC News, Molly said she’s a fan of the other mother’s strong parenting.

‘Parent first, friend later,’ she said. ‘When you’ve asked your child for something, like the simple request to behave, or to clean up after playing, and it’s not being fulfilled, whatever consequence you’ve stated for their lack of actions, must be followed through firmly. You can’t back down.’ She added that ‘good ol’ push ups might not be for everyone,’ but ‘whatever discipline you decide on, you have to stand behind it with a firm foot.’