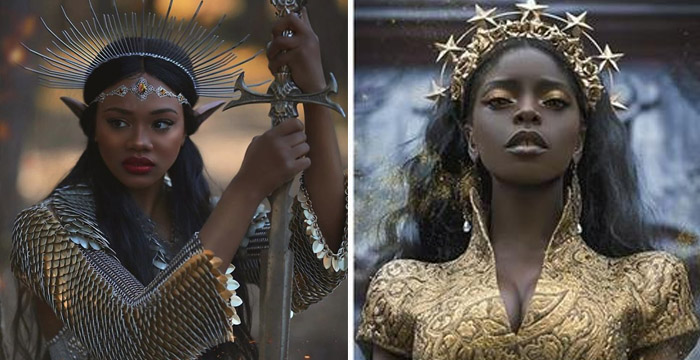 Ethereal looks and surreal scenes have glued many fantasy photography fans to their screens. Sadly, women of color are often left out from the fantasy genre altogether. But one woman who goes by the Twitter handle “@btsanima” decided to redeem black women in fantastical set-ups. She thus started a Twitter thread with the caption “Black women in fantasy photography thread bc even though our presence is small, I will not be deterred.” The thread immediately went viral with 69.4K retweets and comments, as well as 214.6K likes and still counting. So let’s immerse ourselves in a series of jaw-dropping photographs with otherworldly black beauty down below!

Bored Panda reached out to the woman behind this viral Twitter thread, who wished to stay anonymous, to talk more about the presence of black women in fantasy movies. The woman, who goes by the nickname Dee, told us that she has been a fan of fantasy for many years. “While I adore the classics (Lord of the Rings, Game of Thrones, etc.), the lack of faces that look like mine has always made me feel a little bit out of place,” Dee said. Some time ago, she discovered a pocket of Instagram that specialized in fantasy photography and found that there was a very small presence of black women.

Recently, Dee has been getting back into photography and noticed that many photographers had at least one photoshoot with a black woman. “All of them were beautiful and moving,” and Dee decided it was a collection that had to be shared with her followers. Dee believes that the reason why there are so little black women in the fantasy genre comes down to “people believing that black women simply aren’t interested.” For example, “If you check the pages of the models who were included in the thread, some of them do not usually do this genre.”

But as far as photography in general, Dee is convinced it is “an issue for the media industry as a whole.” Even though it has been improving over the years as more and more women of color have been making waves in the modeling industry, there’s still a long way to go. It doesn’t mean there’s nothing to be done about it. “Simply expand your portfolio beyond the usual casting, and photograph black women as well,” Dee suggests.

She also said a photographer has to learn how to photograph dark skin. “Please. Even in high fashion photography, mistakes are being made because people do not bother to adapt to our skin.” Every photographer in Dee’s thread showed that it can be done, so she urges photographers to do their research and simply make the effort. “I have to emphasize that it really isn’t a big step.” After all, all artists should be open to learning new ways to improve and expand their range.

Emilie-Amber Barton – I got goosebumps with every picture. Such incredible works of art. And of course such beautiful women

Sandra Jones – These are all gorgeous women. The sad part is they all have the same features high cheekbones, razor sharp noses and thin perfect lips And a large perfect shaped chest makes me wonder if these pictures are Photoshop. I think the photographer is missing the beauty And diversity in women

Theo Rie – I’ve seen some Theresa Fractale lics on insta before. If the description “a gaze that reaches into your soul” ever fitted someone it’s her. I just wished she was an actress for fantasy/horror movies. She’d make an awesome gothic-horror version of a Galadriel Oh, and she seems to be a metalhead.

Linda Wallace Humphries – I scrolled down the comments and saw a variety of reactions. Not one black person commented or reacted to this…as far as I could see. To me this is something that caucasians are doing as a feel good action. This is no different than all the whites “standing up to defend Black Lives Matter” Where are all of you when the black people actually need your help? They don’t need you to try to mold them into the women in these photos. Go ask your black neighbors what you can actually do to help bring true equality to them!