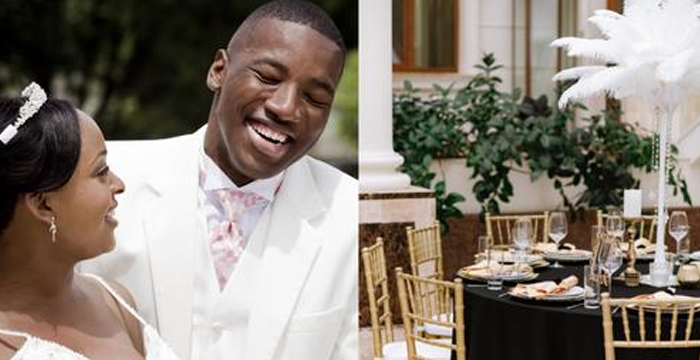 Weddings are a sa-red ceremony that people take very seriously.The amount of prep and money that go into making sure the day is perfect can be astronomical. Extravagant weddings pop up all the time in the news, with everyone seemingly trying to one up each other and make sure they’re wedding is the biggest and best. For one Chicago couple, they went so big that when some guest decided not to show, they had to make sure they paid for wasting their time and money. How much? No show guests were sent a bill for $240.

When it comes to weddings in Hollywood, some people spare no expense making sure they have everything they need. While many had to think small during the worst of the covid lockdown, television host Jeannie Mai and rapper Young Jeezy opted to invite less people to make sure their special day was “special”. Jeannie and Jeezy knew they would have some restrictions due to covid, so the new couple decided to make the day unique, they would invite each others guests and only people who knew them both very well. This mean Jeannie’s cohost Adrienne Bailon-Haugton, Loni Love and Tamara Mowry were not invited.

“So we had a very COV-safe wedding in our home. Which means, I mean…literally just a couple…there were two tables in our living room of our closest, closest family and friends. People I grew up with. People that had to know me and [Jeezy],” Mai said. “Those were the two rules.” Rapper Nfasis seemed to take the whole thing a lot less serious. He went viral earlier this year for showing up to his wedding in a white t-shirt and shorts while his wife sported a full gown. In the viral image he posted to his millions of followers, his wife and guests can be seem dressed for the occasion while Nfasis looked super casual. His wife captioned one of her posts “at least you should have worn a tie.”

Doug and Dedra Simmons (44 and 43) did not play it casual or small for their wedding. The Chicago pair went big for their nuptials. They opened up the event to family and friends, several of which confirmed via RSVPs. The problem, a good portion of those people did not show up on the special day. Doug decided to be #petty and send an invoice to those people. In his now viral post, Doug told the no shows “This invoice is being sent to you because you confirmed seat(s) at the wedding reception during the Final Headcount.”

He continued. “Because you didn’t call or give us proper notice that you wouldn’t be in attendance, this amount is what you owe us for paying for your seat(s) in advance. You can pay via Zelle or PayPal. Please reach out to us and let us know which method of payment works for you. Thank you!” When reached for comment, Doug admitted that the post was petty, however it was a desitination wedding where he and his wife had to front the bill. All he was asking for was a call before hand if guest could not make it.

Keonie Smith – Anybody that is planning a wedding READ the negative comments. These people that have made negative comments they are someone’s “friend”. They have all the excuses in the world. Some excuses may be legit. HOWEVER, many don’t show up because it’s not THEIR wedding. I said what I said

Sherrie Shutterbug York – Exact why I’m not having a wedding/ reception. We spending OUR MONEY on OURSELVES.

Kettia Green – It’s trifling for people not to show up after they rsvp. Like when you pay per person, I can get why they did that. We had people not show up just because and we thought about doing the same. We don’t deal with them and they will never get invited to anything else. We doing everything destination style from now on, even birthdays. Everyone who want to come can pay for themselves. That solves everything.

Alphantina Hayes – I wish someone would apply a charge to my RSVP. I would NOT attend cause it sounds messy & beyond their means from the start. I didn’t agree to pay if I don’t show up. Even if I no show, there are important reasons that I would forget all about a wedding. They should have went to J.O.P. & had a potluck.