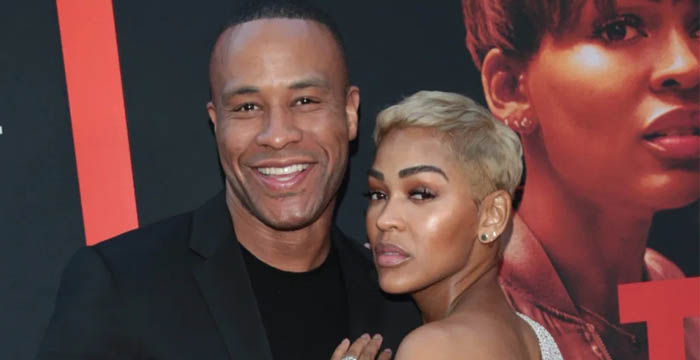 In promotion of her new film with Michael Ealy, Megan Good has been sitting down for a lot of interviews. When she made her way to DL Hughley’s radio show, he wanted to know how her husband, DeVon Franklin, a pastor, felt about watching his wife perform scenes on screen.

Good shared that surprisingly, he doesn’t have an is with them. In fact, he encourages her. The conversation led to a deeper one about church culture and the ways in which church people, who are supposed to be the most loving, are often the most hurtful when they disagree with the way people live their lives. The unkindness and un-Christian-like behavior have actually pushed Good away from the church a bit.

Megan Good: The great thing about him is like he wasn’t looking to change me in marriage. He knew who I was before marriage. And so there is growth that happens individually and collectively. So, it wasn’t like ‘Now, you’re married. You can’t do this anymore. You can’t do that.’

Hughley: Do you go to church with him all the time?

Good: I do. Not all the time though, because if I’m being completely honest, my experience with some church folks has not been that positive. It’s unfortunate because we’re supposed to be the biggest lovers. And it’s like even if you disagree with someone or you don’t think what they’re doing is right, you’re supposed to mind your own business and pray for that person. Other times, you’re supposed to correct in love if that’s what God told you to do. And there was no correction in love. It was like a complete.

Good: And there’ve been a few of them. There have been a few of them. I’m waiting on the timeline—‘I can’t believe she did this scene. She’s a married woman.’ At the end of the day, for me, I still love Christians. I will always love the church. I love my Lord and Savior, period point blank.

That’s first and foremost over everything. But even though I love some of those people, I have to love them from a distance because my spirit is too sensitive. And even though I’ve gotten to a place of balance, I’m the type of person if I see someone crying, I’ll start crying. I’m extremely sensitive so I have to protect my spirit because those people don’t always know what they’re doing.

Lydia Pernier – Im not better than the next man…but I know that to walk this Christian walk demands that we deny self. Alot of times people get “hurt” is because they refuse to let go of self.

kjdnyhmghfvb – Exactly! You should never want to marry someone to change them, marrying someone to grow with them, is the only way it will truly last.

Q Music – People like D.L. bash the Church every chance they get but expect us to keep silent! God has standards, truth is folks just want sin more than godliness… sensitive people take correction as rejection. Some churches aren’t edifying but Alot of Churches is!

Janice Johnson – I was home for Christmas break and on New Year’s my dad and I went to this church, and the leaders were trying to to pray over me, but I just had this feeling…like i wasn’t feeling it. I don’t let just anybody pray over me. I refuse

This Article Was First Published on getuperica.com