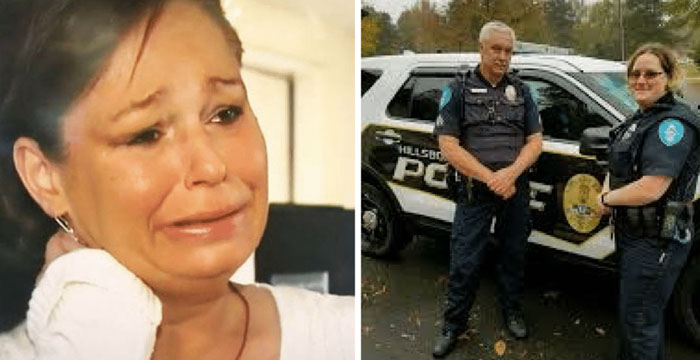 When Food Lion employees spotted a woman ste-aling from their Hillsborough store, they shared her license plate number with local po-lice. When officers responded to the woman’s home Saturday morning to demand answers, they found a sad story. Life has been tough for Theresa West and her three adopted kids. As of last weekend, West said the family had gone without food for three days. “We called the churches and everything and everyone was like ‘We go through Interfaith Council, we go through this and go through that’ and nobody would give us anything. We had nothing,” West said through tears.

With nowhere to turn, West decided to take what she could not afford. As po-lice stood outside of her home, she admitted to sealing about $36 worth of food from Food Lion. “I had to go out and st-eal food, and that’s desperate, and I’m sorry for doing what I did but my kids were hungry,” she said. Touched by West’s story, Hillsborough Po-lice Department Senior Corporal Keith Bradshaw and his partner decided to investigate her claim.

“I opened the refrigerator and it was completely bare. I think there was one little pack of cheese in it,” Bradshaw said. While Bradshaw’s partner took West into custody, the pair decided that something needed to be done.

“So, we said, ‘How can we help that and in the same sense help her so that she doesn’t have to feel that she has to go do those things?’” Bradshaw said. Bradshaw and his partner went to the store and spent $140 of their own money on groceries for West. When she made bail, the officers returned to her home with two car loads of food.

While Bradshaw said his good deed is just part of the job, West said it means so much more. “My favorite verse is Matthew 23:24, ‘Whenever I was hungry, you fed me,’” West said. “I’m struggling so hard to make it and just to have somebody to come help me is just been a miracle.” After filling up West’s fridge, the Hillsborough Po-lice Department said it will continue to help her find the support she needs from local nonprofits.

Linda Lopez – So what happens when the foods gone? Do it again? I’ve been there before but there are things out there.. when you have kids, you do your research!

Brandi Honeycutt-Noack – Iv had no food befor and I went to department of Social Services and they sent me to the food bank in Hillsborough.

Sharon Saunders Williams – My prayers for her. Alot of people are hungry in this country.

Dorothy Thorpe-Turner – There are still kind ppl. in this world. I hope they dropped the charges on her. God bless her and her family.

This Article Was First Published on wral.com