Mike Tyson Says His Kids Aren’t Attracted To Other Black People: ‘I Didn’t Set A Good Example As A Bl-ack Man’ 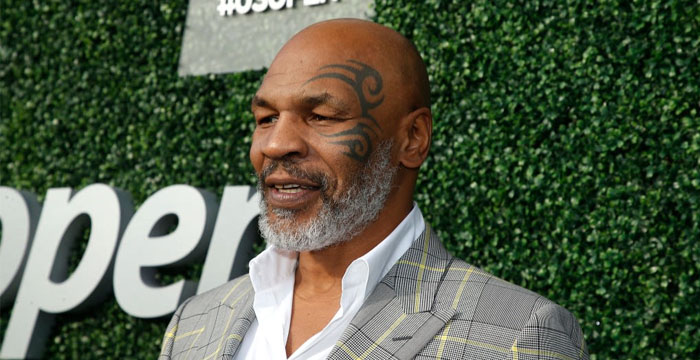 Mike Tyson blames himself for why his kids aren’t attracted to Black people. The retired boxer expressed his sentiments during T.I.‘s podcast “ExpediTIously.” “You know what bothers me?” Tyson said. “Why my kids don’t like Black kids? They don’t date Black kids. Why is that?” The former heavy weight champion then used his daughter as an example. “Sometimes I look at my daughter and I see that she is attracted to a white guy and I say to myself ‘I didn’t set a good example as a Black man,” he said. The 53-year-old also said his son isn’t attracted to Black women.

“I’m like, ‘What is wrong with you? You don’t like her?’” Tyson, who has eight kids, according to B87 FM, said. “And I don’t understand the concept. Their vision, what they see. That’s what confuses me with my kids.” T.I. said Tyson’s kids probably feel closer to white people because that’s who they’re surrounded by. “When you go there, they communicate with the kids they’re around, and most of the kids are going to be little white kids,” the “About The Money” rapper said. “What you were brought up around and what they were brought up around, I think that has a lot to do with it.”

The host questioned whether the kids see race, but Tyson confirmed that’s definitely something they think about. “They’re smarter than you think. Yes,” the boxer said. T.I. added that the important thing is the kids’ happiness. “If every Black person could have some white people in their family, the world would be a better place. My mother-in-law is a white lady. I love her to depart. She loves me to de-a-th,” the rapper said. “My family is her family. Her family is my family. We don’t necessarily see the color. “

Tyson, however, explained why it’s different for him to be around white people. “I never lived in these people’s world, I worked to get to this point,” the former boxer said. “My kids and them, they were born in this world. In my world, I’m different than them.” The heavyweight champ also said during the interview that he has been working on staying faithful to his wife Lakiha Spicer. “She swooped down on me, and told me, ‘This is what we’re gonna do,’ and that’s what happened,” the former boxer said. “That’s why I believe in what I believe in now. Because there’s no way this could be happening. There’s no way I could’ve been married to my wife. I’m not faithful enough. I’m just not that kind of guy. I don’t care about nothing enough more than my dk, so how am I gonna be faithful to somebody? But it worked. I got ten years with her.”

Kim Wright – The simple mindedness of Loni continues to amaze me.Who said Mike speaks for all black men?! He was talking about himself and his kids that statement wasn’t directed to any other black man but him.smh

Donisha Dashantii – It could be a factor DEPENDING on how his children chose to analyze his actions. But proximity, per Amanda, is a heavy weighing factor.

SugaLuv 91 Thomas – I don’t think he should internalize it, but I’m happy he is taking a bit if responsibility as a father in they he recognizes his role as a parent is influential.

Aamir Villalobos – That dark skinned Bl-ack woman in the audience wearing yellow is so pretty. She should be a model.

This Article Was First Published on blavity.com