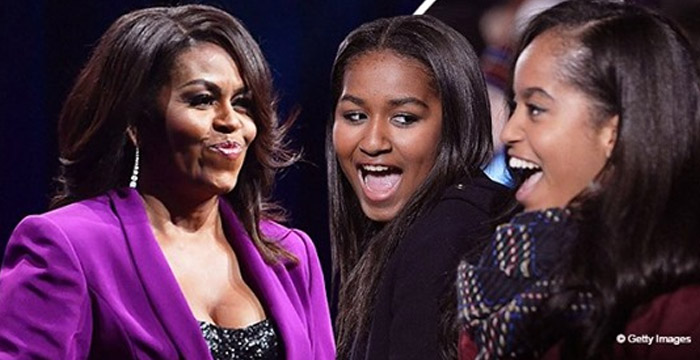 During an interview with Oprah Winfrey, Michelle Obama confirmed she doesn’t track her two daughters on social media, Malia and Sasha Obama.Throughout Tuesday’s appearance at the Barclays Center in New York City, Michelle assured Oprah that she is trying to provide as much as she can with an uninvolved approach to parenting her adult daughters.

Involved approach to parenting her adult daughters. The former First Lady insisted she had to let her daughters find their influence, Malia and Sasha. She said that they should make their decisions as young adults.

Malia, 21, and Sasha, 18, are currently pursuing their studies in their respective colleges; Malia is currently attending Harvard University and Sasha is studying at Michigan University.

Instead of keeping tabs on every step of her children, Michelle depends on her younger family friends to keep up with her daughters while at school.

Michelle opened up about seeing Sasha, 18, leave the nest in a recent Today interview with Jenna Bush Hager and admitted it was just as painful to her as it is to any kid.

The subject was posed by Bush Hager wondering if there were cries as Michelle said farewell to Sasha. There have been, she responded, noting that the family has tried their best to hold their emotions under control.

The founder of “Becoming” is an empty nester formally. While the original move was full of tears, both Michelle and Barack Obama have no reservations for their happier lives now that they’ve had several months to settle into this new stage.

Michelle Obama has said she has started enjoying it. It’s so sweet, y’ all,” she told Winfrey during her interview. Yeah, this is pretty good, she said.

Malia Obama and her millionaire partner, Rory Farquharson, have just been seen taking a smoke crack during lessons, just weeks after the couple came back from an unforgettable Christmas in the UK.

The oldest daughter of the former president and her stunning had a quick lunch at a Cambridge, Massachusetts sandwich shop before they decided to step outside to smoke.